S ixty years after releasing his prêt-à-porter collection, which resulted in his temporary expulsion from the Chambre Syndicale de la Haute Couture, Pierre Cardin is being lauded for that very decision – and several others that led to his enduring career. Opening on the anniversary of the 1969 Apollo moon landing, Pierre Cardin: Future Fashion (20 July 2019–5 January 2020) celebrates the famed couturier and designer in his first retrospective in New York in 40 years. “The Brooklyn Museum, of course, has a history of sharing stories of trailblazing artists and individuals, and this is the perfect place to shed light on a man who was such a disruptor in his field and made so many democratizing advances in fashion,” curator Matthew Yokobosky said at the exhibition’s press preview. Some of the Brooklyn Museum’s recent blockbusters include David Bowie is and Frida Kahlo: Appearances Can Be Deceiving, both previously staged at other institutions. In 2013, the Brooklyn Museum presented a retrospective featuring the work of Jean Paul Gaultier, who as one of Cardin’s former assistants, makes this 2019 fashion exhibition especially full circle.

Now having the stamp of approval from the 97-year-old designer himself, Pierre Cardin: Future Fashion has been amplified for the Brooklyn edition – during 2018 the SCAD FASH Museum of Fashion + Film held a version of the show in Atlanta. The 170 or so works focus on Cardin’s couture output, including several pieces straight from the maison in Paris. However unlike his most associated contemporaries, such as André Courregès, Paco Rabanne and Yves Saint Laurent, the exhibition illustrates how clearly Cardin’s aesthetic language translates into other media, ranging from clocks and televisions to cars and airplanes. The show also spotlights Cardin’s furniture, including a 1978 commode that is identical to one sold last year in Sotheby’s Pierre Cardin, Sculptures Utilitaires 1970-1975 selling exhibition in Paris.

“The miracle of his aesthetic is that it’s not just a white cube,” Yokobosky told Sotheby’s. “There’s more visual language than just being minimal.” In addition to Cardin’s distinct vision, Yokobosky attributes the designer’s massively successful licensed products (he had more than 800 licenses in 110 international boutiques) to being directly involved in their creation, thus assuring their quality and consistency with the high design line. Licensing, in fact, afforded Cardin the opportunity to be explorative, challenging his creativity to go beyond two-dimensional garments. “He didn’t have to worry about putting looks on the runway that would sell,” explained Yokobosky. “He could investigate lighting design. He could make as many prototypes as he wanted. He could do furniture design and not worry about losing money because he’s using 30 coats of lacquer.” Cardin even acquired legendary French bistro Maxim’s in 1981 and the bubble bath-like Palais Bulles in the South of France in 1992, thus expanding his own personal brand and associations with art and architecture.

"In 2069, we will all walk on the moon or mars wearing my ‘Cosmocorps’ ensembles. Women will wear Plexiglas cloche hats and tube clothing, men will be wearing elliptical pants and kinetic tunics."

According to Jean-Pascal Hesse, Pierre Cardin’s director of communications, the designer was intrigued by the Brooklyn Museum exhibition’s connection to the moon landing anniversary. Since opening his eponymous house in 1950, Cardin has been one of the names most closely tied to space-age fashion, and his contemporary collections still question what the future will look like. He once said, “In 2069, we will all walk on the moon or mars wearing my ‘Cosmocorps’ ensembles. Women will wear Plexiglas cloche hats and tube clothing, men will be wearing elliptical pants and kinetic tunics.”

Examples of Cardin’s iconic Cosmocorps and kinetic garments, as well as clothing in the unexpected materials he championed, are highlights of the exhibition. The genderless silhouettes of the 1964 Cosmocorps line, which Cardin spent ten years designing, were particularly groundbreaking in taking the black unitard as a foundational garment to be topped with more colorful vests, aprons, codpieces, skirts and jewelry. The look, taken up by the likes of Truman Capote and Salvador Dalí, bears an uncanny resemblance to the costumes designed by William Ware Theiss for Star Trek – this comparison is featured in the exhibition alongside Cardin’s more direct collaborations with cinema. For example, Cardin dressed Jeanne Moreau in Mata Hari and several other films, as well as Mia Farrow in her first starring role in A Dandy in Aspic. The exhibition’s most humorous connection to film and television is a clip from The Jetsons in which Jane Jetson purchases a “Pierre Martian Original” dress, complete with an extension cord necklace. 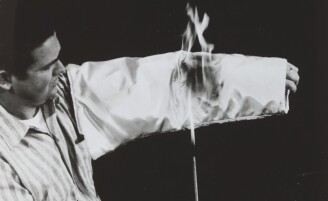 But reverting back to the moon landing, which Sotheby’s also commemorates in its Space Exploration auction on 20 July, Pierre Cardin’s relationship and lifelong fascination with NASA is evidenced within some of the exhibition’s photographic details documenting the designer’s tour of the Houston institution. In one striking image Cardin is seen trying on an Apollo 11 spacesuit. After this October 1969 visit, his space-inspired fashion became less about fantasy and more about being realistically conceived.

Cardin's countless theatrical and experimental silhouettes – the “Pagoda” jacket, “Origami” shoulder and “Parabola” dress – along with his space fashions, undoubtedly inspired generations of future designers, including Martin Margiela, Gaultier’s former assistant whose many radical creations will be offered from a private collection at Sotheby’s Paris this autumn. “It would be insane to lengthen skirts just to follow an up-and-down cycle,” Cardin once said. “It is ridiculous to change the silhouette every six months.” Perhaps Cardin’s designs feel so contemporary to the modern eye because he was immune to trends. Rather we remember his career, which is notably still in the making, as one of endless innovation and imagination where those who walk on other planets give earth’s finest muses a run for their money. 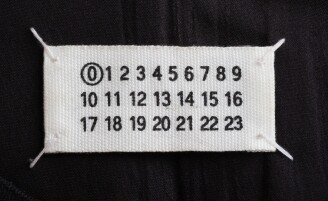