Piero Dorazio: Light is the Mother of all Colours

Un bel niente and Eastern spleen, executed in 1958 and 1959, are two of the finest examples of Piero Dorazio’s signature style of abstraction, created at the peak of his career and both feature in the Arte Moderna e Contemporanea sale in Milan on 18  and 19 April.

Born in Rome in 1927, Dorazio quickly rejected the provincialism of the traditional Italian academic canon after moving to the United States and meeting artists such as Kline, Motherwell, De Kooning and Newman. The spontaneous physicality of ‘Action Painting’ and ‘Colour Field Abstraction’ attracted him and its echo was quickly visible in his canvases. In 1962, while investigating the artist’s poetics, the renowned Italian art critic Gillo Dorfles defined his canvases as “time spatial receptacles” and “luminous radars”. Influenced by other Italian masters, like Giacomo Balla, Dorazio floods the canvas with vivid colours. His works become pure energy, with a glow that radiates luminosity.

Thick brush strokes accumulate and disperse, constructing a chromatic melting that is pleasing to the eye. A fine rain of coloured atoms moves quickly across the canvases. The lines build up the space, spawning a structural rhythm that echoes the melodic notes of a pentagram. Dorazio develops a complex system in which elements settle in an orderly fashion. This architectural rigour is softened by intense shades of colour. The feeling transmitted is the one of peace. Compositional homogeneity and a powerful vibration of colours emerge from the stratified painted surface. In front of his paintings the world seems to stop. This is the power evoked by a genuine art form enriched by real life.

Colour and light, with their strong synesthetic bond to emotions, are the leitmotifs of Dorazio’s oeuvre. If Gillo Dorfles writes of “textures”, the Italian poet Giuseppe Ungaretti, a long-time friend of the artist, focuses on the meaning of light. He asserts: “In his […] membranes of even, almost monochrome paint pervaded by threads of different colours […] inside thick honeycombs, sockets containing pupils armed with stingers full of light, open up”. Thus, in Dorazio’s works light becomes a vital organism. Eliminating the possibility of a focal point from the compositions, he creates homogeneous and dynamic surfaces where luminous layers of paint vibrate at different levels. “Light is the mother of all colours” the artist confirms in his writings.

It is not clear exactly what Dorazio’s meaning was. What we do know is that when we look at his art we are overwhelmed by emotions. In a paradox between the excitement of adrenaline and the calm of silence, Dorazio’s soft colours disclose strong emotions. If, in order to be appreciated, art must be inclusive, Dorazio is an artist who knew how to involve his spectators even to this day. 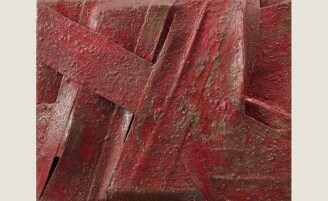