Over the course of two decades, Pablo Picasso created over 3,500 unique and editioned ceramic works fired in clay. Vases, pitchers, jugs, plates and zoomorphic and anthropomorphic sculptural forms abound with animal and classical imagery, mythological creatures, playful and whimsical faces and explorations of the human figure, most notably women. Picasso’s ceramic works were rarely studied or appreciated during his lifetime. However, in recent years his ceramics have enjoyed broader recognition for their inventiveness and originality, showcased in museum exhibitions, sold at auction and collected with fervent enthusiasm. Picasso’s ceramics combine elements of his different practices, fusing painting, printmaking and sculpture. But for Picasso there was something singular about the opportunities that working with clay provided for his creative process. Appreciating the plastic and technical possibilities of three-dimensional forms, he approached ceramics as more than surfaces to be painted. Recalling his father’s work in ceramics, Claude Picasso has said:

“Working with the primal elements fire and earth must have appealed to him because of the almost magical results. Simple means, terrific effect. How ravishing to see colours sing after infernal fires have given them life. The owls managed a wink now. The bulls seemed ready to bellow. The pigeons, still warm from the electric kiln, sat proudly brooding over their warm eggs.  I touched them. They were alive, really. The faces smiled. You could hear the band at the bullfight.”

Looking at his work, it is hard to ignore the more playful and whimsical nature of his ceramics alluded to by Claude. It has been noted that these works were made during a happier and more optimistic time in the artist’s life, after the dark years of the war.

In 1946 while vacationing with his lover Françoise Gilot at Golfe-Juan in the South of France, Picasso met Georges and Suzanne Ramié, the owners of the Madoura pottery studio in the nearby town of Vallauris. The Ramiés welcomed Picasso into their workshop where the artist created three ceramic objects, a head of a faun and two bulls. While Picasso had experimented with clay almost 40 years earlier, this encounter at Madoura so captivated his interest that the artist returned a year later, sketches in hand and his head brimming with ideas. He began working at Madoura daily, completing over 1,000 unique pieces between 1947 and 1948. This was the start of a friendship and creative partnership with the Ramiés that would last until Picasso’s death.

Acknowledging the inherently serial nature of pottery production, Picasso and the Ramiés decided to make multiples of his ceramics that would be sold at Madoura. By this time Picasso was a world-renowned artist, and being well aware of his fame, he wanted to make his work more accessible. “I would like them to be found in every market, so that, in a village in Brittany or elsewhere, one might see a woman going to the fountain to fetch water with one of my jars.” And so, between 1947 and 1971, Picasso designed 633 different ceramic works that were to be made in editions of 25 to 500.

The first session of Sotheby’s Prints & Multiples sale on 27–28 April is dedicated entirely to Picasso’s editioned ceramics, the vast majority of which coming from the Estate of Wagner Thielens (lots 1–51). The breadth of form and imagery represented in Mr. Thielens’s collection provides an ample lens with which to further delve into Picasso’s work, notably his use of animal, classical and female imagery and the way in which he looked to the past for inspiration while creating something unmistakably modern.

PABLO PICASSO IN HIS WORKSHOP IN ANTIBES WITH AN OWL, 1946. © MICHEL SIMA/BRIDGEMAN IMAGES

Owls feature broadly in Picasso’s work, and he drew inspiration from an array of sources. First, the owl was the Greek symbol for Athena, the goddess of wisdom. The owl is also the ancient symbol of Antibes, the region neighboring Vallauris, and where Picasso was working on a series of paintings in the fall of 1946. It was during this time, while working at the Chateau d’Antibes, that Picasso encountered an injured owl. According to Françoise Gilot,

"…one of his claws had been injured. We bandaged it and it gradually healed. We bought a cage for him, and when we returned to Paris, we brought him back with us… Every time the owl snorted at Picasso, he would shout, Cochon, Merde, and a few other obscenities, just to show that he was even worse mannered than him, but Picasso’s fingers, though small, were tough and the owl didn’t hurt him. Finally the owl would let him scratch his head and gradually came to perch on his finger instead of biting it, but even so, he still looked very unhappy.” (Françoise Gilot, My Life with Picasso, New York, 1964, pp. 144-45).

There are several iterations of owls in Mr. Thielens’ collection, including lot 2, a pitcher titled Petite chouette (A.R. 82) from 1949. Perhaps this small pitcher was in part inspired by Picasso’s owl companion.

Picasso continued to explore the owl motif in his ceramic work with vases, pitchers, plates and platters, often repeating certain forms and experimenting with different decorative effects. Of these works, Hibou (A.R. 224) from the edition of 25 made in 1953 stands out, as this is the only one of his editioned ceramics created in this shape. With this sculptural zoomorphic work, the aritst uses volume as an integral element. Here, Picasso is concerned with proportions and a purity of form, creating an organic, living figure.

By making use of a pre-existing form, decorated in his distinctive style, Picasso’s Tripode exemplifies the dialogue between ancient and modern that characterises his ceramic oeuvre. The shape of the vessel was designed by Suzanne Ramié as a modern take on a Cypriotic vessel from the third millennium.

Here, Picasso has taken the shape created by Suzanne Ramié and turns it into a face resting on a pair of hands, decorating the front and back with depictions of Françoise Gilot. This concept of metamorphosis was particularly important in Picasso’s ceramic work. This too has classical roots, recalling Ovid’s metamorphosis of humans into animals. Furthermore, Picasso’s Tripode is a prime example of how ceramics allowed him to paint in the round, something he could never achieve on canvas.

Grand vase aux femmes voilées (A.R. 116), from 1950 is a superb example of one of the major pieces Picasso created in an edition of 25. The vase depicts the backs of four distinct women with differing hairstyles and poses. However, one woman touches the shoulder of another, connecting the group, while also suggestively looking over her shoulder directly at the viewer. Picasso has partially covered the nakedness of three of the figures with translucent veils, imbuing the vase with a sensual elegance. As evidenced by his Tripode, appropriation and the history of the medium was a major factor in his ceramic work. Picasso used deliberate references to the traditions of ceramics from all over the world in his use of forms, decoration, subject matter and iconography. Grand vase aux femmes voilées is an ‘ode to a Grecian urn’, with the four women evoking the ancient motif of the four graces. Even the use of black, white and red recalls classical prototypes. It is not coincidental that the curves of the vase mirror those of the women’s bodies. Picasso stated, “People have said for ages that a woman’s hips are shaped like a vase. It’s no longer poetic; it becomes a cliché. I take a vase and with it I make a woman… I move from metaphor back to reality.” 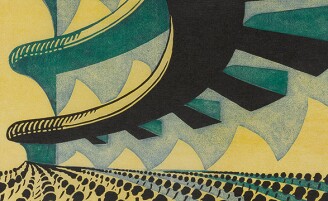