NEW YORK – A month before he died at just 42, Robert Mapplethorpe had one final wish for David Croland, with whom he shared a three-year relationship in the early 1970s. “Tell them everything,” he said. “Keep me alive.”

Taking the late photographer’s words to heart, the New York-based artist has become increasingly candid, curating Robert Mapplethorpe: Fashion Show, a 2013 London exhibition, which included jewellery the two made together, and revealing his personal stories in the 2016 HBO documentary Mapplethorpe: Look at the Pictures. This autumn, Sotheby’s Photographs sale in New York will further fulfill Mapplethorpe’s request with a sale sequence titled Robert Mapplethorpe: Objects of Desire, Important Works from the Collection of David Croland. “I want to share my collection as a group of objects that tied our relationship together,” Croland says of the portraits, postcards and necklaces, all never before offered at auction. Ahead of the sale, Croland sat down with Sotheby’s Eric Shiner to discuss Mapplethorpe’s untouchable gift and reminisce about glamorous 1970s fêtes with Warhol, Halston and Loulou de la Falaise. –Stephanie Sporn

DAVID CROLAND AT HIS STUDIO IN NEW YORK CITY IN 1974. PHOTOGRAPH BY RON GALELLA/WIREIMAGE.

Eric Shiner: Tell us the story of how you met Robert.
David Croland: I met Robert in 1970 on a hot Memorial Day weekend in New York. I was staying with our mutual friend Tinkerbelle at London Terrace on 23rd Street, and she introduced me to Robert and Patti [Smith] in their tiny room at the Chelsea Hotel. Robert looked at me, and I looked at him. Patti looked at us looking at each other, and Tinkerbelle looked at the three of us. They both knew something was up on sight. I was used to beautiful boys, but he wasn’t model beautiful. He had this gorgeous flat face with broad-set eyes. We started seeing each other that day. It went on for three years.

When did word start to spread, or did it stay a secret?
One night we went to this big birthday party for Fernando Sanchez. My date was Loulou de la Falaise, and Patti was Robert’s date. I was agitated because I wanted to tell the truth and be with Robert. Loulou and I left, and he came running after me with Patti. He was so pissed off and hurt. We sped away, and Loulou said, ‘What was that all about? Is he your boyfriend?’ We were busted. Robert had to tell Patti. But it wasn’t a big deal because in those days a lot of people were not so much homosexual or straight. It was more fluid.

Over the course of your relationship, Robert gave you some exceptional objects and presents.
Robert gave a lot of work away early in his career, like Andy. They were very generous.  But I also bought some. I’d tell him I like something and pay $40 or $50. $100 was a lot back then. Patti and I helped support him. She liked that I came into his life because I introduced him to all my pals who bought his work.

What was it like watching him develop over those three years?
It was interesting because he had never met anyone like my crowd before. It was a very sexy time in New York in the 1970s. So when Marisa Berenson came into the room with her wonderful perfume, jewellery and sexy, chic clothes, he was flabbergasted, but he always had the best manners. If you look like he did, it gets you in the room, but you don’t stay unless you have a combination of looks, manners and humour. Like Andy, Robert would say the craziest, wittiest things under his breath.

Did he know that he would become famous?
He never said ‘I want to be famous.’ He wanted to have his work shown, appreciated and bought. People think the sex came before the work. It did not. He worked all the time, like Andy. Keep in mind he had no money. That’s why he invented the Polaroid with the case as the frame. It was brilliant.

"Young photographers want to be two people today: one is Andy Warhol, and the other is Robert Mapplethorpe."

What was your experience like as the first male he photographed?
I knew what to do, and he liked that. Each Polaroid took at least five minutes, sometimes ten. For me, Polaroids were what photographers took to look at the light. They weren’t art, and they weren’t important until I saw what Robert started to do with them. I was patient because I realised he was making something special.

What is the significance of the jewellery you two would make?
That he wanted to make money. I would make big crazy jewellery to sell, and I owned a lot of pieces. Robert loved jewellery. One day I bought all these shells for him because he thought they were too expensive. They were about $5 each, but they were nice shells like abalone, etc. I don’t know where he learned this summer camp, macramé technique though.

Did he go to camp? Was he a Boy Scout?
Probably. He scouted boys a lot. But the fact is these pieces are great because sometimes he’d wear eight at once. The most elaborate necklaces he made, which were called the charm necklaces, were about $100 or $150. The others were about $25 to $50. He was smart enough to eventually stop so people would want more. He had a keen sense of supply and demand.

What do you think is Mapplethorpe’s biggest legacy in today’s art world?
I believe young photographers want to be two people today: one is Andy Warhol, and the other is Robert Mapplethorpe. What they don’t understand is you can’t just copy a Mapplethorpe.

You’ve shared many similarities between Andy and Robert. What do you think is Robert’s distinguishing quality?
I would say his sense of composition. He was an altar boy from a strict Catholic family, and his composition owes a lot to the Church and the altar. There was always a central focus. Also, Robert’s lighting was perfect. His work was very formal, and whether it was an orchid or a nude, everything he photographed was elegant. Highly charged, yes, but never vulgar.

Did any of his work shock you?
When Robert and I broke up he hadn’t started doing the really hardcore pictures. I didn’t like them at all, and I told him they were a big gamble. He said he was going to do it anyway. But now, as I said, everything he did was elegant because of the lighting and his magnificent composition – even fists and whips.

Even though you’re still a young man, what do you hope your legacy will be?
My legacy as a beautiful boy was established the minute I moved to New York. But I don’t care about my legacy. I’m interested in Robert’s because he’s dead, and I’m here to protect and appreciate his life as a human. He was sweet – this is a misconception about Robert. He was gentle and smart. He loved to laugh. He liked to dance (his own way) but what he really loved the most was making art.

Click the slideshow to view works from David Croland's collection on offer in Sotheby's Photographs sale: 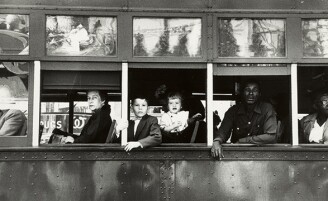