Norman Rockwell at the Polls

On November 4, 1944, Norman Rockwell asked America an important question when his painting, Which One?, appeared on the cover of The Saturday Evening Post, just three days before the United States Presidential election. One of the country’s best-known and beloved artists, Rockwell painted over 300 cover images for The Post. Week after week, each one effortlessly portrayed aspects of American history, culture and politics with the artist’s classic warmth and wit.

In Which One?, Rockwell captured the national sentiment surrounding this. Occurring in the midst of the Second World War, the election dominated the national discourse as Thomas E. Dewey, the Republican governor of New York, challenged the longstanding Democratic incumbent president, Franklin Delano Roosevelt, for the office. Though the war had turned in favour of the United States by late 1944, Roosevelt faced considerable hostility from those who disapproved of his signature domestic and foreign policies. Rumors concerning the President’s failing health also surrounded his campaign. For the first time in over a decade, more Americans than ever had to ask themselves, “which one?”

Rockwell engaged with political subject matter from the earliest years of his career, beginning with Political Argument, which was featured on the cover of The Post on October 9, 1920. Throughout his body of work, Rockwell sought to be as inclusive as possible in order to connect with the widest audience. Thus no matter how openly he spoke to the political or social issues of the day, his imagery never revealed even a degree of partisanship and instead often sought to be humorous or comforting rather than didactic or moralizing.

In Which One?, Rockwell depicts a resident of Cedar Rapids, Iowa standing in a voting booth, poised to cast his vote for one of the two candidates. Indicated by the array of political pamphlets that line his pocket and the morning newspaper he holds, the voter has clearly attempted to educate himself on his choice, yet the bemused expression on his face reveals that he remains stymied by the task and he continues to weigh his options on this rainy November day.

Rockwell did not intend the voter in Which One? to represent a specific person. Instead, he is meant to embody every American, any citizen who has ever participated in the electoral process or struggled to make a difficult decision. “[Rockwell’s] subject was average America,” explains Thomas S. Buechner. “He painted it with such benevolent affection for so many years that a truly remarkable history of our century has been compiled. Millions of people have been moved by his picture stories about pride in country, history, and heritage, about reverence loyalty, and compassion. The virtues that he admires have been very popular, and because he illustrates them using familiar people in familiar settings with wonderful accuracy, he continues to grow as new generations live through the same quintessentially American types of experiences that he so faithfully depicted in his art” (Norman Rockwell: A Sixty Year Retrospective, New York, 1972, p. 13). 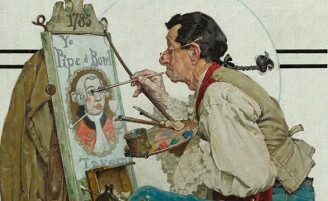