A confluence of modernity and tradition, the everyday and the heroic, the miniature and the immense, Pakistan is a rich and fertile space for artistic development, both locally and globally. The growing interest in art from Pakistan is not a mere spark of curiosity but the consequence of a sustained appreciation of its culture, capable of withstanding the test of time. From the sprawling metropolis of cultural Karachi to the economic and political hub of Lahore, the group of artists featured in Sotheby’s sale of South Asian Modern and Contemporary Art represent the tremendous artistic energy that has developed over the years.

Ali Imam, the brother of the renowned Sayed Haider Raza, aligned himself with the new Pakistan following Partition. Openly defying capitalism, he was imprisoned for his beliefs and for being a member of the Pakistani Communist party. Imam’s strong political agenda is perfectly encapsulated in the striking work Untitled (Farmers). From the Rouault tradition with strong use of colour and outline, Imam elevates the plight of the working class. His other work in the sale, Untitled (Cityscape), features a mosque rendered in a stylish Cubist manner hinting at the artist’s national pride and introspection.

The prolific Sadequain was self-taught and completely untraditional. His morose comments of society and the human condition employed the pictorial vocabulary of Kufic script and the natural forms present in the countryside around Karachi. His work suggests a strong confluence of Cubism and constructivism and Sadequain was responsible for the renaissance of Islamic calligraphy and his amalgamation of inspirations is what makes his works truly unique, as seen in Acrobats.

Another work from the 1960s which is considered to be from the artist’s most prolific period, features a red sun casting its rays on a cactus plant, resulting in a luminous hide-and-seek of light.

Abdur Rahman Chughtai is remembered today as one the most distinguished Pakistani artists of the 20th century. He led a group known as the Lahore Orientalists, which attempted to formulate their own version of a national art style. A master in the revival of Mughal aesthetics, this poetic portrayal of a lady at her toilette is serene and graceful.

This painting in particular, is notable for its lightness and ephemerality. By fusing influences from diverse fields, the artist forges a unique brand of modernism, instilled with symbolic elements that had its roots in the classical Islamic and Indian traditions.

Politically charged and with their lure of the local, embedded in the richness of the legacy of art, as well as the poetry and politics of the psyche of the country, the selection of works here is an attempt to bring together the varied artistic voices of contemporary Pakistan and represents only a small vignette of the rich pool of talented artists the region has to offer. 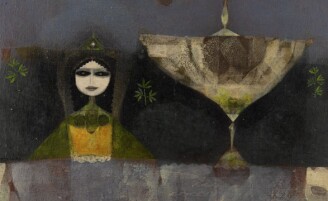