Meet the Curator of Helene Schjerfbeck at the RA

By Sotheby's
Christian House talks to curator Anna-Maria von Bonsdorff about Helene Schjerfbeck, a prominent Nordic artist of the 19th and early 20th century, and now the subject of a major Royal Academy retrospective .

W ith its rural modernism and confessional spirit, Schjerfbeck’s work sits somewhere between that of Cézanne and Francis Bacon. Born in 1862 into a middle-class family from Helsinki, her flair for drawing was spotted at an early age. A period of travel during the 1880s and 1890s – including formative periods in Paris, Italy and St Ives – gradually took her painting away from naturalism to a more fragmented and flat fresco-like aesthetic.

Numerous difficulties – a serious accident in her childhood; romantic disappointments; a quiet later life spent in the Finnish countryside – failed to subdue an illustrious career which spanned seven decades and blazed a trail for women artists in the region.

Schjerfbeck was described in one obituary as “the greatest woman painter of all time in the Nordic countries” – do you think that is accurate?

Internationally she has been in focus quite a lot in recent years. Interest in her art is growing all the time. It changed in the 1980s when many art historians in Finland started to discover these women artists – at the Ateneum there was the first women artists exhibition, I think in 1982. It was kind of a starting point. After that we have discovered a lot of women artists but Schjerfbeck still holds the number one place. 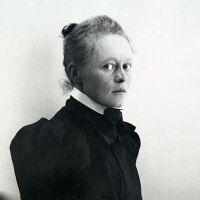 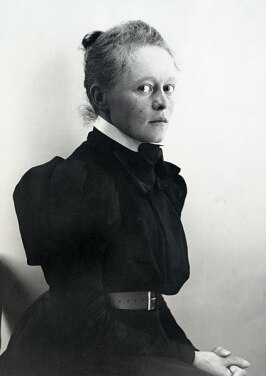 What distinguishes her work?

She had a very long productive career. And her best work is from her last years, so it’s not a typical artist’s career. In that way she is exceptional. She had the possibility to remake herself. Her art is challenging. For the central gallery of the London show we are hanging all the self-portraits. It will be very intense.

Can her shift from naturalism to modernism be explained by a single event?

It was a gradual process. We can put her career into different major styles but in between there is a big process over ten years from the 1880s to 1900. All those years when she was travelling, she was very open to receiving influences. She was trying to find her own style long before she found it. When she goes to St Ives, that period in the end of the 1880s, that is the changing period, when she is looking for something, for her own individual language.

She is a painter’s painter, but did she experiment with other mediums?

She did designs for table cloths in the 1890s. I think it had something to do with the idea of the simplification of the surface. And she did a series of lithographs later on. But I think her main interest was to work on canvas.

There was a touch of the Miss Haversham about Schjerfbeck. Was her art and character shaped by loss?

I think later writing about her has given her that image, more than was really true. She was quite secluded but on the other hand almost all the artists at that time moved from Helsinki to build their own studio houses. And in a way she did the same. If you are an artist and you are over thirty you are not in the cafes.

She was, perhaps, not the easiest of personalities?

I think she always wanted to marry. She was envious of her friend [Austrian artist] Marianne Stokes, who married [English landscape painter] Adrian Scott Stokes, because they were both artists. In a way she wanted to have this life where she could travel and be free to work. But, then again, life happens.

Late in life she became interested in haute couture?

I think Paris was the place for her. It happens when you go somewhere, then you come back home, and you dwell on it being a fabulous place. I think Schjerfbeck was interested in fashion in her youth but then it grew. There is a kind of moment in the 1920s when she really gets into fashion – the flapper girls and the garçonne look – which you can see in many of her paintings. And she also talks about makeup. No one else does that.

Does international interest in Finnish artists such as Schjerfbeck and Akseli Gallen-Kallela represent a larger trend for all things Scandinavian?

Yes, of course. I think we are in the same wave to discover new artists from the Nordic countries. First, it was the Danish Golden Age, then it was Edvard Munch. I think we will find out new names, new fabulous artists. We haven’t discovered everything yet.