M arine Van Schoonbeek started her career at the Museum of Contemporary Art Chicago before joining the Centre Pompidou team as a public relations chairperson. In 2012, she became head of FIAC's Institutional Relations & Collector’s liaison, a position she held for three years before joining galerie Chantal Crousel as a Director.

In 2017, she created with four other women Thanks for Nothing, a philanthropic platform bridging the art industry and civil society to defend citizens' projects. She is today the president of Thanks for Nothing, which has already mobilised more than 100 artists, collaborated with 35 cultural institutions and brought together more than 500,000 people, to support over 20 associations contributing to social progress by campaigning for the defense of human rights, access to education and environmental protection.

Sotheby's: What attracted you to art? What made you decide to dedicate your career to it?

MVS: I grew up in a highly politicized environment and I retained a willingness to analyze our relationship to the norm. First, I studied political science, social science and psychology. But very quickly, my desire turned towards a questioning revolving around aesthetics which would possibly find answers in art and creation.

The art world is a committed world that questions and challenges social norms. And I sincerely believe that representing artists and defending their voice is an act of commitment in itself. For more than 10 years, I have built my career with a clear will: to find a way to link my passion for art to my personal commitment. This is also the case for my associates Anaïs, Anne-Sarah, Bethsabée, Blanche and Charlotte and that is why we decided to create the philanthropic platform Thanks for Nothing in 2017.

Since then, we have participated in two consecutive editions of Nuit Blanche, organized two major international symposiums on the theme of art and engagement at the Louvre and mobilized more than 70 artists for the benefit of 15 associations that we support over the long term. Among them, I am very proud to have become administrator of the Primo Levi Centre, a reference for solidarity and care provided to refugees that are victims of persecution.

S: How do you think the role of art and artists will evolve in the near future alongside developments in society, technology and politics?

MVS: Thanks to the artists’ voice, we are convinced that it is possible to foster the "willingness to do" that Thomas Hirschhorn speaks about. Thus, since 2017, the artist's voice has been at the heart of Thanks for Nothing's projects. That is why each of our initiatives takes the name of the work of one of the artists who supports it, like Thanks for Nothing, a beautiful piece by John Giorno evoking the duality of each situation, or of WE DREAM UNDER THE SAME SKY, the work of Rirkrit Tiravanija who gave her name to the first major event we organized for refugees.

On a more personal note, I think that the crisis we are going through reinforces the conviction that led us to create Thanks for Nothing: art is a key to poetic and symbolic reading that allows us to better understand the world around us. By reconciling fantasy and reality, as Freud puts it in Totem Tabou more than a century ago, the artist offers "realities of a new kind" which was also shown very well by Gael Charbau's exhibition "Alternative Reality" at the Palais de Tokyo last year.

S: What do you think of online auctions?

MVS: In 2017, WE DREAM UNDER THE SAME SKY, organized with Chantal Crousel Gallery and the curator Julie Boukobza, has enabled us to raise more than 2 million euros for the benefit of five associations that welcome refugees in France and Europe.

This project, and in particular the auction that was its beating heart, was a turning point in my life. First of all because I literally lost my voice for a week as soon as the sale ended! Secondly, because this project pushed me to decide that I wanted to dedicate all my time and energy to Thanks for Nothing. Since then, I understood all the work behind the auctions, without sacrificing the emotional acme they provoke, I am committed to the cause.

Recently, we worked with Sotheby's to create a sale to benefit the Merci Endowment Fund, bringing together the works of some thirty major artists. We were all very much looking forward to seeing this project come to life during a big evening at the Beaux-Arts in Paris on April 22nd. Given the current situation, we had to think of a different format, which led us to take a closer look at online sales. Seeing the incredible results achieved by this new model over the past two months, it is clear that it does not only work, but that it generates just as much, if not more excitement while certainly responding better than a "physical" sale to our environmental aspirations. So I am convinced that this is our future. 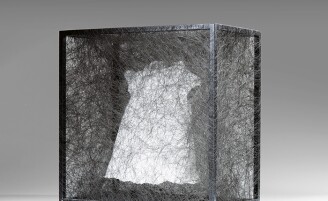