Master of the Motif – Magritte in Paris

T his autumn, the Centre Pompidou in Paris will host René Magritte: La Trahison des Images, a major retrospective of the Belgian painter. Following on from their exhibitions of Edvard Munch, Henri Matisse and Marcel Duchamp, the spotlight will now be turned on Surrealism. Many famous works from public and private collections around the world will go on display alongside rarely seen drawings and paintings in this important survey of Magritte’s career.

Like his contemporary Salvador Dalí, Magritte’s approach to Surrealism relied upon a precise, illusionistic technique to create the enigmatic, often hallucinatory scenes that are characteristic of the Surrealist desire to disconcert and disorientate. This distinctive style coupled with Magritte’s intriguing personal iconography make him among the most-sought after of the Surrealist painters. The exhibition charts his investigations into philosophy and the narrative qualities of painting, as well as the recurring themes of curtains, shadows, flames, trees and clouds – ever present in the images he constructed.

“Magritte was an extremely visionary artist for his generation, and for the generation of Pop and conceptual artists, as well as for painters belatedly discovering his période vache, the only point when the Belgian Surrealist really painted,” says Virgine Devillez, the former project manager of the Magritte Museum in Brussels who recently joined Sotheby's as a specialist in the Impressionist, Modern and Contemporary Art Department. “In fact, he tended instead to conceive of his works through writing, through verbal and/or epistolary exchanges with his friends. The act of painting was a culmination, an approach which justified a return to his many themes, like a thinker putting into perspective his vision of the world and its concrete and mental representation.”

Interest in his work is at an all-time high; this exciting exhibition at the Centre Pompidou follows the major retrospective at the Museum of Modern Art, New York and the Art Institute of Chicago in 2013–14. This interest has been reflected at auction and Sotheby’s has been privileged to offer some exceptional works by Magritte, achieving a number of important records for the artist. In February 2014 Sotheby's established a record for a painting by the artist, selling Le beau monde for £7.9 million. More recently Sotheby’s has also had notable success with Magritte gouaches – which are often highly sought-after – culminating in the sale of Le Maître d'école in November 2015 for a new record price of £4.4 million ($6.7 million). 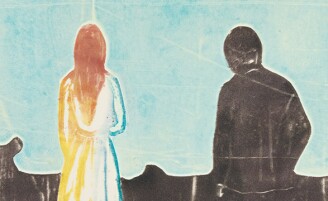