By Sotheby's
Max Janlet was the first owner of Magritte's La salle d’armes , and a major figure who belonged to the great tradition of Belgian collectors in the interwar period and during the “Glorious Thirty” (1945-1975). His collection reflects the momentum of a generation of intellectuals and industrialists who loved Surrealism. It includes works by René Magritte, Paul Delvaux, Joan Miró, Max Ernst, Francis Picabia, Pablo Picasso, and Jean Dewasne. Ahead of the Art Impressionniste et Moderne sale at Sotheby's Paris on 29 March, we take a closer look at this significant collector.

These collectors were above all art lovers who participated in many committees and associations related to modern art, while frequently lending their works in order to promote this style to as many people as possible. Most of them went far beyond simply buying works; they were close to the artists and were their travelling companions and friends.

Janlet was no exception to this rule. Born in 1903 in Saint-Gilles, he was the son of Félix Janlet, a talented industrialist and interior designer, and the brother of Pierre Janlet, a fellow collector, who was also a gallery owner and dealer who played a key role in the Centre for Fine Arts in Brussels, from its inception in 1928.

After attending the Athénée Royal d'Ixelles school, he studied landscape architecture in Gembloux and at the Royal Academy of Fine Arts of Brussels, before joining his father with the family business, which was renamed Janlet et Fils. Very early on, like his father and brother, Max Janlet became passionate about music and art, as well as fencing (hhe became the Belgian champion in 1928!). He began collecting in the 1920s, with donations from his father, as well as from artists whose studios he often visited, such as Constant Permeke and Creten-George. The first purchases he made himself involved some of the most modern works from this period: a work by Frits Van den Berghe bought in 1925 from the gallery Cabinet Maldoror, some works by René Magritte purchased in the 1920s from Geert van Bruaene or Odilon-Jean Périer, and a piece by Max Ernst from Galerie Le Centaure in 1927, to name a few.

“Surrealism is revolutionary because it is the restless enemy of all the bourgeois ideological values which keep the world in its present appalling condition.”

As a well-informed art lover, he grew his collection with some works by Gustave De Smet, Joan Miró, Heinrich Campendonk, André Derain, Edgard Tytgat and René Guiette, bought from the dealers Walter Schwarzenberg and Paul-Gustave Van Hecke following the stock market crash of 1929. Later on, he further added to his collection with pieces by Paul Delvaux, Georges Braque and Pablo Picasso, and in the 1950s, with work by artists from the École de Paris. One of his last purchases was a work by Jean Dewasne in 1970.

In 1976, following his death, he bequeathed 50 pieces from his prestigious collection to the Museum of Ixelles and two works to the Royal Museums of Fine Arts of Belgium, including L’Amiral by Arcimboldo. La salle d’armes by René Magritte was one of the artist’s works that Max Janlet bought very early on, in 1929, from the dealer Geert Van Bruaene, who managed the legendary gallery, the Cabinet Maldoror.

While La salle d’armes is a major work due to its provenance, from one of the most prestigious Belgian collections in the interwar period, it is also an exceptional painting, considering the time in which it was made. Dated to 1925-26, this piece wonderfully illustrates the period when Magritte was moving in Dadaist circles in Brussels, following his discovery of de Chirico’s work which he regarded as a revelation: “In 1910, de Chirico played with beauty, and imagined and created whatever he wanted.[…] He painted Le chant d’amour, where we see surgical gloves combined with a classical bust.

This triumphant poetry has replaced the stereotyped effect of traditional painting. It is a complete break with the intellectual habits peculiar to artists who are prisoners of their talent, virtuosity and all petty aesthetic frills. It is a question of a new vision, where the viewer rediscovers his isolation and hears the silence of the world.” (Louis Scutenaire, Avec Magritte, pp. 73-74) 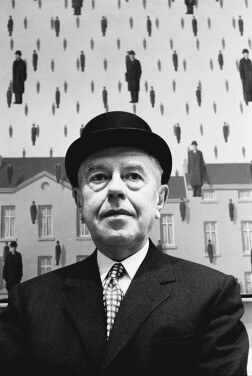 In a context of economic difficulties, the artist used a jute canvas and industrial paint, probably furniture paint, to create this piece. X-ray analysis of this work, carried out by the European Archaeometry Centre at the University of Liège, also reveals the existence of an underlying composition, likely a geometric abstraction that is characteristic of the period which immediately preceded the first Surrealist paintings. This painting is therefore crucial to understanding the chronology of Magritte’s oeuvre. It belongs to a handful of works that were painted during this pivotal period that marked a decisive shift towards Surrealism.

Like many other Surrealists, Magritte likened his conversion to Surrealism to a kind of rebirth. In his autobiography, he described his first Surrealist canvas, La fenêtre, which was painted several months before La salle d’armes, as his "first painting": "In 1924, René Magritte discovers his first painting. It shows a window seen from inside. In front of the window a hand seems to be trying to catch hold of a bird flying past. There are still traces of past research in the picture, certain parts treated ‘in a plastic manner’, according to the jargon which had already been abandoned.” (Magritte, 1954, p. 10)

Faced with the abstraction of reality that appeared to him like a curtain in front of his eyes, in this work, Magritte was already engaging with a reflection on reality and illusion, a theme which would become of paramount importance in his work. All of the poetry of the real, which is characteristic of Magritte’s world, is therefore already present in this composition, which contains hints of Surrealism. The artist chose to stage the scene in a completely new way, which brings to mind Comte de Lautréamont’s quote: “As beautiful as the chance encounter of a sewing machine and an umbrella on an operating table.”

Magritte then moved towards the theory of disturbing objects, illustrated here by the incongruous presence of the female model’s upside-down head. The woman thus becomes an object. On the side, the table has turned wood legs, which are characteristic of Magritte, who would soon go on to detach and use these objects completely out of context in some of his most famous compositions: Le Jockey perdu and La Traversée difficile. The modernity of this painting also lies in the theatrical nature of the box in which these incongruous objects are displayed, which seems to invite the viewer to enter the scene.

The target at the centre of the painting prefigures Pop Art; it is a subject that would be explored on many occasions by one of the movement’s main exponents, Jasper Johns. Thus, La salle d’armes confirms Magritte’s status as one of the most pioneering and influential artists of the 20th century. 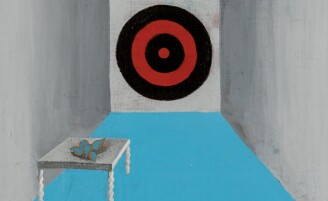