On 4 July in London, Sotheby’s Treasures sale (London, 4 July) will present one of the few works by Antonio Canova ever to come to auction. Long thought lost, the Bust of Peace has not been seen in public for more than 200 years since it was shown for the first time at the Royal Academy summer exhibition of 1817.

Born in November 1757, Canova was one of the few artists to transcend the political restrictions imposed by revolutionary awakenings and the Napoleonic wars. He worked for almost every major party within Europe, among them the Pope, Napoleon, the Habsburgs, the Prince Regent of Great Britain, and the Venetian Republic – a testament to his remarkable talent, diplomacy and artistic autonomy.

The sculpture belongs to Canova’s celebrated series of Ideal Heads (Teste Ideale), which embody the artist’s ideal of beauty and were created with the purpose of gifting them to friends and patrons. The Bust of Peace was carved in 1814 for his first British patron and close friend John Campbell, Lord Cawdor, in thanks for his long term patronage and friendship, and in part for his help in repatriating art from Italy looted by the French armies during the Napoleonic Wars.

Having been passed down through five generations of the Cawdor family following John Campbell’s death in 1821, the Bust of Peace was forgotten over time. By 1962, when the contents of the family house Stackpole Court in Pembrokeshire were sold at auction, the Bust of Peace was simply described in the catalogue as ‘a white marble bust of a lady wearing a diadem’.

Now, following extensive research by the present owner, who acquired the sculpture as an unattributed work, the bust has been identified as the long-lost Bust of Peace by Canova. The masterful work is a significant rediscovery, of seminal importance within Canova’s oeuvre, and has great historical resonance.

The sale of this remarkable rediscovered work coincides with an exhibition at The Frick Collection in New York that examines the history of one of Canova’s truly lost masterpieces, and the only work he created in America, a full-length statue of George Washington. Sculpted in 1821, the statue was tragically destroyed in a fire just 10 years later. The exhibition, which includes a preparatory plaster model of the work, as well as a number of sketches, will be open until 23 September.

The Treasures sale will take place in London on 4 July. Click here to view the full catalogue.

A third sculpture by Canova was featured in Sotheby's award-winning web series, Treasures from Chatsworth. The Sleeping Endymion was commissioned from Canova by the 6th Duke of Devonshire in the early 19th century. Watch the video below: 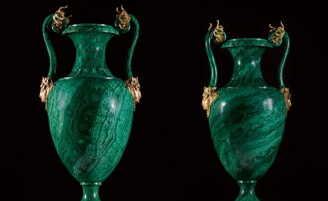