Lavery Poised to Make a Splash in London

Although winter is now well upon us, for a reminisce of summer days in the sun one need look no further than Sir John Lavery’s Chiswick Baths, which will be offered for sale in the Victorian, Pre-Raphaelite & British Impressionist Art auction on 15 December. Applying a spontaneous and colourful painterly approach, Lavery captures the lively atmosphere of day out at the pool.

Lavery's painting is an early depiction of the new wave of swimming pools that emerged in London at the turn of the 20th century and enjoyed great popularity. The painting dates from the late 1920s, and on first impressions there looks to be little to distinguish it from a similar scene today. Yet these pools were novel creations and were particularly exciting new places for the young to mingle. They coincided with a wider relaxing of social formalities, permitting mixed bathing sessions, a place to show off new bathing fashions and even enjoy a smoke by the poolside.

Chiswick Baths was opened in 1910 and while today it now exists as an indoor development, the fun and excitement of a day at Chiswick Baths has been preserved on film thanks to Topical Budget, the 'Great British Newsreel' of the 1910s and 20s at the BFI National Archive. The contemporary footage shows girls and boys throwing themselves off the diving board and larking about with abandon. One thing for certain is there weren't the strict rules in place at the poolside as there are today. Comparing the film reel to Lavery's painting, one can see the distinctive double-decker changing rooms on the left-hand side and the four-tiered diving board at the back, as well as get a sense of the busy activity at the poolside.

The artist's interest in swimming baths was stimulated by his visits to Monte Carlo and Palm Beach, Florida in the 1920s. At Palm Beach he was captivated by the People's Pool, otherwise known as Gus's Baths and which resulted in such works as Winter in Florida, 1927. Back in London, Chiswick Baths was only a short drive from the artist's studio in Cromwell Place and so was an easy destination for the artist to reach.

Many of these outdoor pools subsequently languished or were redeveloped during the course of the 20th century, but Lavery's painting nostalgically recalls the former glamour of the pools, or as they were described then 'inland seasides'. However, lidos are enjoying resurgence in London with the opening of the King's Cross Pond in 2014; Brockwell Park and London Fields Lidos attracting large city crowds, and talk of the innovative Thames Bath surfacing at Victoria Embankment, such scenes may be familiar sights again. 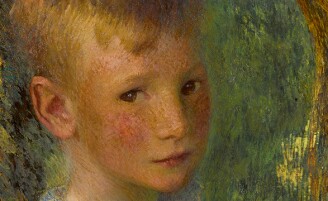