By Sotheby's
This autumn Sotheby’s is offering Property from the Collection of Kathleen and Martin Field (20 October | New York), two Philadelphia Francophiles with an eye for style. Ahead, discover how a few of the auction highlights reveal an astonishing synergy between furniture and fashion, across multiple generations and countries.

A love of French decorative arts often goes hand in hand with a love of French fashion, and many great 20th-century collectors of French furniture have been keen admirers of Parisian haute couture. Kathleen Field was no exception, and during her lifetime she built up an encyclopedic collection of contemporary French fashion that she bequeathed to the Philadelphia Museum of Art. 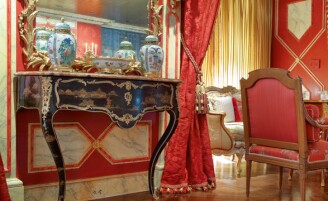 “Kathleen Field’s remarkable eye for style permeated every facet of her life. Her personal taste was reflected in her paintings, interiors and gardens, but was nowhere more evident than in her exceptional clothing. Not afraid of bold sartorial choices, Mrs. Field delighted in dramatic and flamboyant looks that few others could pull off, from extraordinary sculptural evening gowns by Pierre Cardin to an exuberantly patterned catsuit by Christian Lacroix...This fall the Museum celebrates the glamour and creativity of fashion as an art form in the major exhibition Fabulous Fashion: From Dior’s New Look to Now (16 October 2018– 3 March 2019), and we are honored to feature a number of stunning garments and accessories worn by Kathleen Field.” 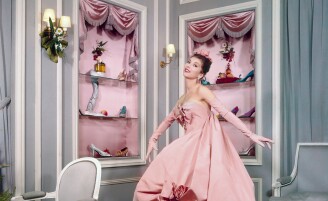 One of the Fields’ most important works of furniture is the exceptional Louis XIV commode by Francois Lieutaud, acquired from Maurice Segoura in Paris. Lieutaud was a contemporary of the legendary Boulle. During the first half of the 20th century, this commode belonged to Minoru, Lady Foley, widow of Gerald, 7th Baron Foley. Minoru, née Greenstone, was a colorful character, born in South Africa to aristocratic and Jewish Russian parents who had fled the pogroms of the late 19th century and settled in Johannesburg. By 1922 Minoru was living in London and met Baron Foley whilst riding in Hyde Park. Within weeks they were married.

Lady Foley was passionate about French fashion and made regular trips to Paris where she frequented known and up-and-coming designers including Madeleine Vionnet. A group of four Vionnet gowns made for Lady Foley was recently acquired by the Victoria & Albert Museum, London. Thus in the 20th century, the Lietuaud commode was owned by two great connoisseurs of French fashion and decorative arts from two different continents, whose purchases would later greatly enrich two important museum collections of French couture.

By yet another remarkable coincidence, Lady Foley also owned pair of gilt bronze candelabra, after a design by Boulle, of the identical model to lot 1150 in the Field Collection. The Fields always displayed their pair on the Lieutaud commode, and it is tempting to speculate that at some point Lady Foley did the same, wholly unaware that an identical arrangement would be recreated over forty years later on the other side of the Atlantic.