Joaquín Sorolla and the Iridescent Light of the Mediterranean

By Sotheby's
This March, the National Gallery, in collaboration with the National Gallery of Ireland and Madrid’s Museo Sorolla, opens its doors to the first UK retrospective of the work of Joaquín Sorolla y Bastida since his first one-man show in Britain at Mayfair’s Grafton Galleries in 1908.

T o coincide with this exciting event, Sotheby’s will be holding its own selling exhibition in honour of Sorolla with an exhibition titled Beyond Impressionism: Sorolla & His Contemporaries running from 13 to 21 March. A highlight of the exhibition is Sorolla’s signature work, Children in the Sea, Valencia Beach. Painted in 1908 and an iteration of his major painting of 1899, Sad Inheritance, it is a masterful evocation of childhood, innocence, and energy. The theme of life on Valencia’s beaches dominated Sorolla’s oeuvre between the mid-1890s until 1910 and was met with critical acclaim at his one-man show in New York in 1909. 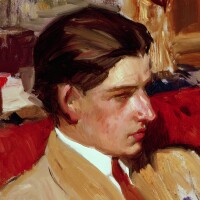 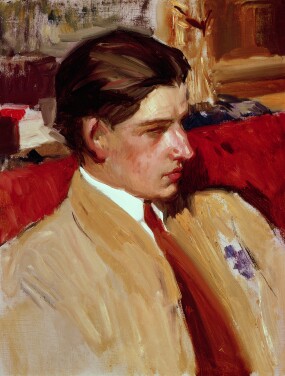 Sorolla’s fascination with light was rooted in his experience as a teenager in the workshop of the photographer Antonio García. The combination of impressionistic staccato brushstrokes and a vibrant palette he employs in Children in the Sea convey beautifully the iridescence of the Mediterranean sun, heat and breeze. The specks of light glistening on the children’s bodies and mirrored in their reflections contrast with the broad, dark strokes of the sea. The full sails of the boats on the horizon evoke powerfully the strong winds that offer relief from the heat of the sun which suffuses the scene. The subject is caught in the moment and the immediacy of its playful motion is frozen in time by Sorolla’s fluid and equally playful brushstrokes.

A strikingly similar background to that in Children in the Sea is to be found in Sorolla’s 1904 painting Young Fisherman, Valencia which features in the National Gallery’s upcoming show and was previously sold by Sotheby’s in 2010. Whilst the children frolic in the waves in Children in the Sea, in Young Fisherman a teenage boy, by now plying the trade of his father and his ancestors, gazes out to sea as he works, nostalgic for the childhood innocence of his past. When painting Young Fisherman, Sorolla’s own children were fourteen, twelve and nine; this painting perhaps represents Sorolla’s own curiosity for what the future held for his own children, especially his son Joaquín who is most strongly reflected in this figure. 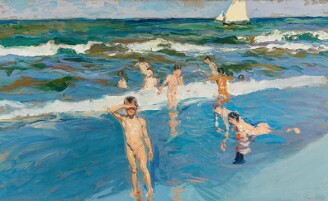