T he forthcoming Impressionist and Modern Art Evening Sale at Sotheby's in London will be led by a remarkable landscape by Gustav Klimt, marking the first time in over two decades this work has been offered for auction.

First unveiled to great acclaim in Vienna in the Kunstschau 1908 exhibition, Bauerngarten is considered one of Klimt's finest landscapes. Whilst famous for his commissioned portraits of Viennese society, landscapes were a long-held personal passion for the artist. Klimt spent several months each summer holidaying with friends and family in Attersee, where he devoted time to crafting these intricate explorations of the natural world.

The exhibition caused a sensation, with critics claiming that Klimt had endowed his works with an almost mystical quality, and declaring him a master landscape painter. Writing a review of the show Josef August Lux stated: "The flower meadows are even more beautiful since Klimt has painted them; the artist gives us an eye with which to see the radiant glory of their colours. We never learn to seize nature in her magical beauty other than through art, which always renews her appearance' (J.A. Lux quoted in Gustav Klimt: Modernism in the Making (exhibition catalogue), op. cit., p. 115)".

In 1906, Klimt attended an exhibition of works by Vincent van Gogh in Vienna, and his subsequent appreciation of van Gogh sparked a significant shift in his appreciation of paint. Drawing on this, the dynamic brushwork and vibrancy of Bauerngarten reflect this turning point in Klimt's style.

The square-canvas format chosen by Klimt for the present work heightens its visual impact and creates a marked difference to traditional landscape painting. Klimt started to use this type of support exclusively for landscapes in 1899, to achieve two specific effects; the symmetry denies the dominance of either horizontal or vertical elements in the picture, thus containing the scene with a tighter efficiency. Additionally, the square increases the sense that these are objects for contemplation. Significantly Claude Monet had started to use the square format in 1898 until 1916 to depict his waterlily ponds at Giverny. Monet was attempting to increase the impact of the surface of his paintings; the square negated the traditional emphasis on perspective and gave his daring brushwork a stable support upon which to play. Both Klimt and Monet used this technical innovation to make a break from the accepted form of landscape art.

The unconventional composition of the Bauerngarten is also key to its visual and symbolic potency. The triangular arrangement of the uppermost flowers enrobed by poppies and zinnias bears some striking visual similarities to that of several figurative paintings that were executed during the same period. During the years 1905-1908 Klimt painted some of his most celebrated and innovative works, including Der Küss, Der Hoffnung II and his golden portrait of Adele Bloch-Bauer. The compositions of these major works all reference the bejewelled studies of flowers worked on during the summer months, and their dazzling intensity is mainly derived not from his use of gold and silver pigments, but their sections of superb brushwork depicting brightly coloured flowers.

Bauerngarten reaffirms Klimt's status as a master of Landscape, as Helena Newman, Global Co-Head of Sotheby’s Impressionist & Modern Art Department & Chairman of Sotheby's Europe, explains: "Innovative in its composition and jewel-like in its exquisite blaze of colours, it is one of the artist's greatest masterpieces ever to come to auction". 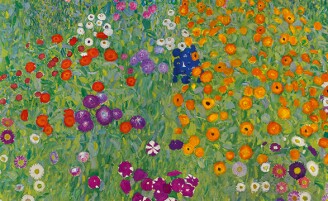