Catherine II, Empress of Russia was well known for her sumptuous collections of art, furniture and jewellery. As an exceptional necklace she owned is offered for sale in the forthcoming Magnificent Jewels and Noble Jewels sale in Geneva, Diana Scarisbrick looks back at the legacy of Catherine the Great, and the opulent room she had built in the Winter Palace to house the items she treasured.

This diamond necklace with bow knot attachment is not only a remarkable jewel in itself, but its Russian royal provenance puts it in a class of its own. This jewel was owned by Catherine II, Empress of Russia: the most striking and colourful figure on the stage of European political life during her reign. For thirty four years she ruled a mighty empire which stretched from Siberia to Poland. After her death in 1796, her friend the Prince de Ligne, who had named her Catherine the Great, declared that this title - which has never been lost - resumed all her genius, courage, sense of justice, and force of character. In spite of her success, she once confided to the Prince de Ligne that she could have served Russia better if she had been born a man. Ever the courtier, he assured her that being a woman was a positive advantage. ''Believe me, you are so much more impressive in your beautiful embroidered orange red velvet dolman or tunic than a man decked out in boots and shoulder sash can ever be. In addition, the five huge diamonds blazing out from your hair are far more effective than a man's hat, which is either ridiculously small or ridiculously big''. He was right. Her diamond jewellery proclaimed her power and her rank as Empress and appealed to the Russian taste for sumptuous goods.

In 1764, recognising that grand jewellery was an integral part of the Russian court tradition, Catherine transformed the Imperial Bedchamber in the south east corner of the Winter Palace into the Brilliant Room, described by the German visitor Johann Georgi: “Her room is like a priceless jewel case. The regalia is laid out on a table under a great crystal globe through which everything can be examined in detail… The walls of the room are lined with glass cabinets containing numerous pieces of jewellery set with diamonds and other precious stones as well as insignia and portraits of Her Imperial Majesty, snuff boxes, watches and chains drawing instruments, signet rings, bracelets, sword belts and other priceless treasures among which the Empress chooses presents for giving away”. The four main jewellery suppliers to the Empress were Leopold Pfisterer, engaged by Prince Dimitri Michailovitch Golitsyn, Russian ambassador to Vienna in 1763, who signed a 6 year contract but remained in St Petersburg for thirty-four more years, Jérémie Pauzié of Geneva and his compatriot Louis David Duval who, in 1789 with Jacob David Duval founded the firm Louis David Duval and Son.

Commanding huge revenues and the mineral wealth of the Urals, there was no limit to what Catherine II could afford, and in 1792 she decided to transfer her jewels for display into a new, more spacious Brilliant Room decorated in classical Russian style, hung with paintings by Antony van Dyck and with the celebrated Peacock clock of James Cox in the centre. But Catherine II did not concentrate all her interest in brilliant gem set jewellery to the exclusion of other types of craftsmanship. As she adored tobacco; the goldsmiths of St Petersburg, Paris and Berlin perfected their skills of enamelling and chasing under her patronage, while producing innumerable exquisite snuff boxes for her pleasure. An inventory of 1789 lists the various items which add up to a collection of some of the most exquisite jewels and objets de vertu created during the eighteenth century.

This jewel conjures up a picture of the Empress escorted by six pet greyhounds choosing jewels for a state occasion in the Brilliant Room, then moving next door to her chambre de toilette. There, a hairdresser might crown her piled up hair with a Russian style kokoshnik tiara, aigrette, or jewelled pins, perhaps those too designed as bow knots similar to that attached to this ornament, which are still in the Kremlin. Afterwards, dressed in her picturesque loose sleeved Muscovite style gown, she would proceed to a reception, a gala dinner or court ball. Even in her final years, her stately appearance continued to fascinate, as the artist Elizabeth Vigée Lebrun describes ''although not tall, with her erect head, eagle eye and countenance so used to command, all was so symbolic of majesty that she looked as if she were Queen of the World. She wore the ribbons of the three Orders over a dress of noble simplicity. It consisted of a red velvet dolman over a gold embroidered white muslin tunic with wide pleated sleeves, turned back in oriental fashion. Instead of ribbons, the most beautiful diamonds were scattered over the cap covering her white hair''. Similarly, a diamond ornament such as this, worn as part of a parure drawing all eyes towards her, would also have enhanced that incomparable aura that set the Empress Catherine apart from her subjects. With such a history, the possession of a jewel of this quality and rarity would surely be the glory of any modern collection. 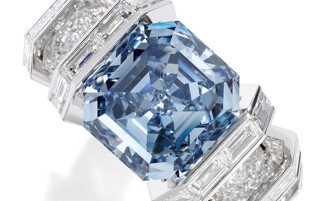