Howard Hodgkin: Portrait of the Artist

H oward Hodgkin, whose personal collection features in an auction in London on 24 October, redefined the way in which we look at the world; he developed a personal pictorial language that speaks of interactions and emotions.

Just as his eye for the exceptional resonates through his paintings, his ability to identify the extraordinary in unexpected places was deployed in his incessant hunt for art and objects of exquisite beauty. While each of his paintings evokes his response to a very particular place, person or situation, the items he surrounded himself with in his home offer a personal portrait of their owner, one of the greatest artists of our time. The kaleidoscope of objects he so carefully drew together takes us behind his paintings and casts new light on his aesthetic innovations, revealing what inspired him and what he held close.

The objects with which he was surrounded reflected his passions, influences and interests and nourished his paintings. As items were purchased he would find a space for them, move them around and then finally settle on a place he felt they should stay, according to the other objects around them, creating dynamic visual dialogues. Objects from Italy to India, which suggest a modern day grand tour, were displayed side by side, heightened by the jewel-like tones with which the walls of his London home were painted. Spanning art history through time and geography, they offer a vivid revelation of his private world in all its intense and exhilarating glory.

Howard did not keep his own work as he said they got in the way of new work, though he did keep two paintings from his debut show at the ICA in 1962, Bedroom and Travelling.  “I have absolutely no desire to collect my own work, but do have what with age seems an almost unquenchable thirst for acquiring other things to look at,” Howard stated. “I think of collecting as a sort of virus really, and I was infected… It is an addiction”. So much so that he kept auction catalogues and a tape measure by his bed, marking things that he fell in love with.

Speaking of the forthcoming sale, his partner Antony Peattie said: “Howard liked the idea of a sale after his death. The objects have served their purpose to him, they were what he called his ‘Must Haves’ that, in some mysterious way, fed his work. But now they amplify his absence. After he died the house was so sad: all these objects remained in place but, after 33 years that we spent together, everything had changed. The sale represents a personal portrait of Howard. And it will enable his executors to fulfil his wishes."

His friendships are powerfully represented in his personal collection by the works of fellow artists with whom he was particularly close and, crucially, those whose art he respected and admired. He once described Patrick Caulfield as “the closest I ever came to having a painter-colleague”, and it is significant that one of Caulfield’s most important still life paintings should end up in his collection. Painted in 1966, Sweet Bowl reveals Caulfield’s heightened awareness of both colour and space, an interest that he clearly shared with Hodgkin.

The presence of two works by Bhupen Khakhar in the collection is also the result of a long and storied friendship between the two artists. De-Luxe Tailors, 1972 (Estimate £250,000–350,000) which featured prominently in the recent Tate retrospective of Khakhar’s work, epitomises the artist’s early style and is a signature work from this period. Hodgkin was in many ways his mentor and in some ways his liberator. Hosting Khakhar in England at various times in the late 1970s, finding him teaching positions and advocating for his works with galleries and museums, Hodgkin helped Khakhar to expand his horizons: his art seemed to become freer, looser, funnier and unflinchingly honest. It was Howard Hodgkin’s friendship and encouragement that may have sparked Khakhar’s recognition as one of India’s greatest 20th century artists. 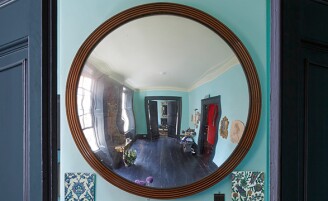