By Felix Hale
A masterpiece by William Hogarth, "William Wollaston and his Family in a Grand Interior" has been acquired for the nation and allocated to the New Walk Museum and Art Gallery, Leicester.

T his important conversation piece was acquired under the Acceptance in Lieu of tax scheme in an arrangement negotiated by Sotheby’s Tax, Heritage & UK Museums on the basis of an agreed value of £3million. £564,528 was raised by the “Save the Hogarth Campaign”, including significant grants by the National Heritage Memorial Fund and the Art Fund, which covered the value of the painting in excess of the owners’ tax liability. This remarkable work has been on loan to the Leicester museum from the Wollaston family for the last 75 years and has now been secured for display in the city in perpetuity.

The Wollaston Family is one of Hogarth’s truly great conversation pieces, a genre which he did much to establish as one of the leading art forms in Britain in the 18th century. As well as being one of Hogarth’s most finely executed works the painting is a fascinating snapshot of London life in the 18th Century. The painting also allows the viewer a rare glimpse into a London interior of the time; many Baroque interiors have been stripped out of London houses over the centuries and so this work is invaluable as an architectural record of the period.

Hogarth’s conversation pieces were designed to appeal to men of taste and social refinement. It is interesting that Hogarth, who is perhaps best known for his satirical works such as Marriage-A-La-Mode in which he lampoons the upper classes, was able both to appeal to the establishment as well as satirise it.

William Wollaston (1693-1757), of Finborough Hall, Suffolk was one such man of taste. He commissioned this grand group portrait when he became head of the family following the death of his unmarried elder brother, Charlton Wollaston.

William and his family are dressed appropriately for a period of ‘half-mourning’ in sober, dark coloured clothes, unadorned with decorative trim or any jewelry. Although the scene is one of mourning The Wollaston Family is ironically one of Hogarth’s liveliest works of this particular genre. The scene captures a moment in motion: a chair is about to be brought to the table; a game of whist is in action.

The pentimenti, traces of earlier painting on the canvas which can be seen in several areas including around the magnificent pug (at the time known as a ‘Dutch Dog’) and just beneath the marble bust of Charlton Wollaston on the mantelpiece, suggest that the composition was not planned with drawings but painted with great spontaneity.


The Wollastons are engaged in polite, genteel activities, taking tea and playing cards. In this polite setting no figures interact directly with one another; only the pug and the woman seated on the extreme left of the picture engage directly with the viewer. However, this depiction of politeness is still tender, intimate, and concentrates on family affection and lively interaction; in this family piece Hogarth has taken the cosmopolitan rhetoric of politeness, that of the coffee house and the club, and translated it into a domestic setting.

As well as the family members themselves, the exquisite features and furnishings of the room are redolent of refinement and good taste. Although possibly depicting a room at the family’s country seat, Finborough Hall, the Baroque interior seems more likely to be the family’s newly acquired London residence in Charterhouse Square.

The stuccoed ceiling, the rich late Baroque panelling, and the magnificent eight-branch silver chandelier which dominates the centre of the composition, are not indicative of the latest fashion of the early 1730s, but rather of a slighter earlier Huguenot taste.

The silver tea table, which is marked by the Wollaston coat of arms in the centre, is more extravagant and rococo in its feel. The style of the silver tea table is a type used by Hogarth in several of his paintings such as The Assembly at Wanstead House, although no examples of this type of tea-table are known to exist today.

This exquisite conversation piece showcases both London polite society and Hogarth’s virtuosic technique. In painting the Wollaston Family Hogarth produced not only one of his finest works in terms of its handling and its composition, but also one of the most intriguing vignettes of eighteenth century London society. 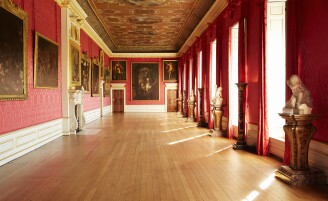 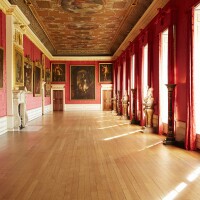 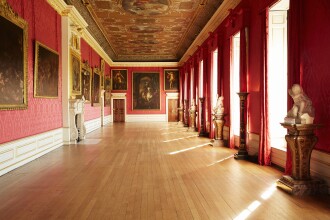