By Joe Townend
One of Britain’s most celebrated Modernists, Barry Flanagan takes the weightiness of classical sculpture and adds lightness. Flanagan knew the history of his medium well, making tongue-in-cheek references to traditional monumental sculpture.

B arry Flanagan always knew he was going to be an artist: "I was a fully fledged sculptor from the age of 17. I stepped right into it and embraced the physical world." The Welsh sculptor may have discovered his calling early, but it wasn’t until he was 38 that he cast the first of the bronze hares that would make him one of Britain’s most celebrated Modernists, representing Great Britain at the Venice Biennale and featuring in major exhibitions around the world, including retrospectives at Tate Britain in 2011 and Chatsworth in 2012.

The motif of the hare – often in dynamic poses and rendered at a monumental scale – dominated his work from the 1980s until his death in 2009. While the turn to bronze marked a radical departure from his experimental early work, it captured a wry sense of humour that he established at the very start of his career.

Born in 1941 in the seaside town of Prestatyn, Wales, Flanagan was the son of an Irish film set designer who worked for Warner Brothers in nearby Liverpool. He briefly studied architecture in Birmingham before enrolling at St Martin’s School of Art in London in 1964, which he settled on after attending an evening course led by the English abstract sculptor Anthony Caro in 1961.

As a student, Flanagan supported himself with odd jobs, including a stint at a bakery filling doughnuts with jam. His early work, minimalist stitched-cloth sculptures filled with plaster or sand, won him praise from critics and dealers, and he spent much of the following decade making abstract sculptures using rope, sand, cloth and, in particular, stone.

Even in these experimental years, Flanagan’s work was funny. His titles were cheeky – Her warm tit rolls, 1981, which resembles a soft sandbag – or absurdist, such as his stone sculpture a nose in repose, 1977, which he selected because he felt the quarried rock looked like “a nose... a civil weaponry at peace”.

“I use the hare as a vehicle to entertain. I abstract from the human figure, choosing the hare to behave as a human occasionally.”

Humour was at the heart of his turn, in the 1980s, away from abstract stone carving to bronze. His first bronze hare was modelled from one he bought at a butcher’s shop. “I use the hare as a vehicle to entertain,” he said, later in his career. He liked the way the animal “carried the conventions of the cartoon”, making them “behave as humans” and blowing them up to a monumental scale.

By the time he represented Great Britain at the 40th Venice Biennale in 1982, his hares had multiplied, taking pride of place in the pavilion alongside a handful of works in stone and wood. He knew the history of his medium well, and throughout the rest of his career made tongue-in-cheek references to classical monumental sculpture. His 1996 work Thinker on Rock reworks Auguste Rodin’s Le Penseur (1880) with a wiry bronze hare, chin on paw, deep in thought.

Flanagan takes the weightiness of classical sculpture – its permanence, the way it can speak for a whole group of people at once – and adds lightness. Monumental, cast in bronze and often vast in scale, his hares represent a new kind of hero: deft, smart, and above all, funny. 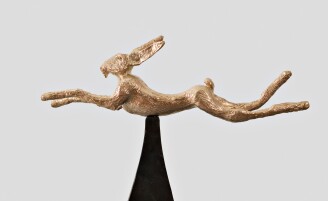