Great Wine and Food to Support a Great Cause

NEW YORK – On 19 October, wine collectors will have the unprecedented opportunity to attend an evening sale dedicated to Château La Mission Haut-Brion. Along with the celebrated vintages and rare large format bottles, there will also be a special charity lot presented by Prince Robert of Luxembourg, Chairman and CEO of Domaine Clarence Dillon: the chance for six people to experience the combination of great food, wine and service at the new restaurant Le Clarence in Paris, along with a visit, tasting and lunch at La Mission Haut-Brion itself. The proceeds will benefit New York-based non-profit Getting Out and Staying Out (GOSO), which seeks to reduce recidivism by supporting young men in their education, employment and financial independence.

Additionally, the winning bidder and their guests will enjoy a private tour of the Château La Mission Haut-Brion cellars and vineyard followed by a private lunch and special tasting for six people in the main dining room hosted by Prince Robert or Jean-Phillipe Delmas.

Proceeds from this one-in-a-lifetime lot will support GOSO, which has established itself as one of the most effective anti-recidivism organizations in the New York City area, empowering young men to avoid re-involvement in the criminal justice system and to reshape their futures through educational achievement, meaningful employment, and financial independence. Over the past decade GOSO has proven that early intervention within the criminal justice system, along with supportive counseling, educational assistance, vocational training, and workforce development can successfully reduce recidivism and help participants become contributing members of their communities.

To view the charity lot or place an absentee bid, click here. 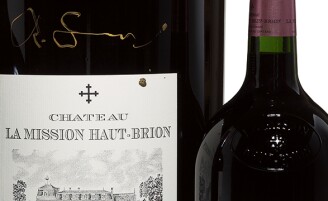