When did you first realise that you wanted to forge a career in wine?

Very early, at the age of 17 as I did a couple of internships on wineries in Germany and South Africa.

What drew you to the Rheingau region, and Lorch specifically?

The Rheingau region has always fascinated me, from the start of my career as a trainee at Schloss Johannisberg back in 1996, throughout my entire professional life. Even when I worked abroad in Spain or Australia or Italy, I always kept the connection and tasting and learning about so many wines, I always thought that the Rheingau region was special because of its diversity of soils and microclimates, and the old vines in the North of the region beyond Rüdesheim in Lorch. They give a glimpse of the taste and glory of the region especially the variety Riesling a century ago, when Rieslings from Rheingau or Mosel were more expensive than famous French and Italian Châteaux. It was clear to me to return to the Rheingau after working in different wine regions worldwide.

Taste-wise I always had the “taste picture” of Riesling from slate on my mind: salinity , minerality, crystalline wines full of elegance and energy. I was looking for Riesling vines growing on slate and quartzite soil. Old vines with reduced yields and the original taste and spirit of long gone times prior to the start of industrialised farming and viticulture (1970/71).

Your estate has a focus on heritage, conservation and organic production. Why are these factors important to you?

They became more and more important to me along my professional career. First of all, I have been an employee for many years myself and I know how hard the work is and how important a clean and healthy work environment is. Therefore an organic approach to viticulture and winemaking is the essential base of my work – and in my opinion it should be the general overall and state and politically forced base of all agriculture in the world.

Why is heritage important?

I have seen so much and worked in many countries, also “younger wine countries” than Germany, and through this I realised that vines and wine are probably one of the few – if not the only – living thing that outlives time. From this perspective, wines and vines are witnesses of time – this is simply amazing to me and they need to be protected!

This thought has always fascinated me. Suddenly the perspective of what one does is far bigger that just the economic goals for a determined time period. In relation to the age of the world and earth, we all are here in this world for just a fraction of a second… what we maintain and what we keep alive will be there for future generations. This belief was much more important a century ago. Today we live in a society where we only look at short term goals and it is very hard to protect historical treasures, like these old vines.

Can you explain the process of recultivating old vineyards in Lorch and how you have done this successfully? Why had these sites been unused for such a long time?

We recultivated the old vineyards in Lorch in two ways: one was taking over old abandoned vineyards and re-pruning them so they became fertile again. And also tearing down wild growing land, where there were vineyards ten, twenty or fifty years ago and replanting them with old Riesling clones from around 1900.

Lorch was always a sleeping beauty but historically it never gained the honors in Rheingau like Rüdesheim, Johannisberg or Kiedrich. This might have had to do with the exposition of south west facing sites further up north – cooler, and before climate change, probably harder to mature the grapes. So Lorch was never really famous to start with. In the 70s and later, when viticulture was more and more industrialised, vintners were paid per litre per hectare, and the era of Liebfrauenmilch and wine scandals were tearing down the litre and then land prices. Many of the old sites that were steep and hard to work – only by hand – were abandoned. Many family-owned domains were closed and the following generations took on other professions.

How do you incorporate sustainability into your processes?

Lorch is part of the UNESCO World Heritage Mittel Rhein Tal and one of the biggest bird sanctuaries from Germany. Whenever we replant or work there it is always in alliance with the local natural authorities. We stopped working with big retailers that ship our wines to warehouses, for example in the North to then later supply our wines to customers in the South. We stopped own wines deliveries to single customers around Germany in private transporters and used consolidated wine transporters, that collect wines from many domains.

Sustainability to me means also fair HR rules: we offer regular German work contracts and legal rights to our workers. We pay German wages instead of seasonal worker salaries. We provide fully furnished apartments for our season workers and incorporate them into our team

We have many more goals to accomplish such as a biodynamic farming, our own permanent compost system, water reuse and our own ecological energy production. This is a big task for us and we are not yet able to sufficiently solve it, as we have not yet build our own domain where we could consolidate and sufficiently solve all the matters above. I built the domain from scratch in 2006 and have rented all the spaces until today, and we have many structural challenges and dependencies. Currently we are working on finding the land for our own construction where we could realise all the above.

Both you and your wines have won many awards. What has been the proudest moment of your career so far?

There are many proud moments but for sure the ratings from last year are amongst the biggest achievements from our domain and my team. But there are other things too – hard to measure – that make me very proud and happy: Lorch wasn’t at all famous when I went there. It was more that people, retailers, other colleagues asked me: "why Lorch?" and warned me it was difficult and not good enough to settle. This was in 2005/06 – land was cheap and no-one wanted to have it.

After making my way, bringing every international journalist visiting us there, talking about Lorch and bringing our wines onto the best restaurant wine lists worldwide, now after nearly 17 years, Lorch has gained a high reputation amongst collectors, retailers but especially other winemakers. There is no doubt about Lorch anymore being one of the great places in Germany. Land prices today have tripled and there is hardly any land for sale or even for rent available at all.

The 100p TBA is from the site Lorcher Krone: this is a partially classified first growth, but not even all of it. The TBA even comes from the unclassified site higher up. It is the first wine ever to be rated with 100 Parker points from the Rheingau region in the 40 years of Parker history – and it is from a place that is not on the radar of many. This speaks for the great potential of the Lorch valley and I am proud that I was able to prove the greatness of Lorch terroir to the wine world.

"I am proud that I was able to prove the greatness of Lorch terroir to the wine world."

This is the first time you have auctioned wines through Sotheby’s. What is so special about these particular bottles?

They are a dessert wine trilogy which we have not made before. Dessert wines at our domain are not a standard product. I don’t believe they should be as they are related directly to the years and special weather conditions – they should never be forced.

And I understand my role to not produce the same wine with same parameter each year but to take the nature given in each vintage and create the best possible from it. Generally, noble sweet wines have the ability to age and last forever by their components of high concentrated sugars and acidity. Making wine, I always try to make something special, like a piece of art. I look at each cuvee each year. I see especially these three dessert wines as a piece of art and collectors' items.

What would you describe as the signature characteristics of an Eva Fricke wine?

Traditionally, wine has been a very male-dominated industry. What has been your experience as a female producer?

I have earned a lot of respect and received support from some of the best. Certainly there are many tough moments and also challenging encounters or simply, often surprised people. Maybe some channels are closed because of being a woman, but even more open up because of being a woman – that is what I would say. At the same time I think men have their challenges too and they are simply not asked for them they struggle much more silently.

I am often asked if women are the better winemakers. I simply think this is not the question. Men are men and women are women, we are not meant to be the same. I don’t think we should question if there is a difference and create a confrontation. To me it is more about the fact that every gender has something to offer the other doesn’t have, so has every generation something to offer the others don’t have. It should all be about the combination and team cooperation across gender and across generation!

Further I don’t think men and women make wine differently, I think it is more a question for the personality of the winemaker. My approach is to make very purist wines. Minerality, soul, soil, pure fruit , flow, energy are much more important to me than the same “taste pattern“, Oechsle (sugar content) or deep complexity each year. 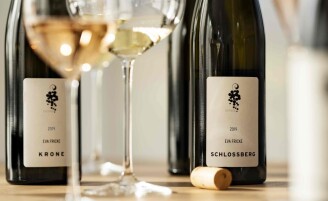