Foujita: Ahead of the Curve

N ext year, an exhibition of the work of Léonard Tsuguharu Foujita will open in Paris, curated by Sylvie Buisson, the world-renowned Foujita expert and writer of the Catalogue raisonné. The event will mark the fiftieth anniversary of the Japanese-French artist's death. Youki au chat, being offered in the Impressionist and Modern Art Day Sale at Sotheby's in London on 2 March, has been requested as a highlight work of the exhibition. This painting marks a pivotal time in the artist's creative and emotional development, exposing a deeply personal narrative coloured by both love and ambition.

In 1921, Léonard Tsuguharu Foujita met a young woman named Lucie Badoud; for the following decade she lived as his muse, lover and wife, inspiring some of the most sensual and striking paintings that the artist ever produced. Together, Badoud and Foujita were celebrities of the Montparnasse social scene: they hosted lavish parties at their home while their names continually graced contemporary gossip columns.

Foujita had been taken at once with Lucie's beauty: her snow-white complexion and sinuous curves. He re-named her 'Youki', meaning 'snow' in Japanese. She remembers: "I didn’t like my first name, Lucie. So Foujita's first move was to 'de-baptise' me and rename me Youki; his second: to request I pose for a large nude painting". Indeed it was precisely at this time, when Foujita incorporated into his œuvre two of the elements for which he is today most celebrated: his motif of the nude figure and his 'fond blanc', a specific white ground which he applied on canvases to give them a luminous quality. The latter technique was developed out of the artist’s desire to represent what he now considered the most beautiful of materials: human skin.

THE ARTIST WITH MIKE ON THE ROOF-GARDEN OF HIS HOUSE IN PARIS, CIRCA 1930.

Foujita had striven to perfect his fond blanc and reportedly never revealed the unique formula to anyone. He was no stranger to relentless work, frequently practicing his techniques and sticking to a strict sleeping schedule to maximise his productivity during waking hours. He explained: "I leave all my materials in a state of disorder in my studio; I never tidy them away even to receive a visitor. To do that would be stupid. The visitor would scarcely have left when I would get back to work two minutes later. To save even more time, I cook in my studio" (quoted in Sylvie Buisson, T.L. Foujita inédits, Paris, 2007, p. 122).

In 1924, the year after the present work was painted, Foujita's former lover Fernande attacked Youki at a public exhibition of the artist's work, enflamed by the jealousy awakened in her on seeing his new portraits. For it was in these paintings of the 1920s that Foujita first demonstrated a sensual quality in his portraiture which spoke both of passion and tenderness; the present work is one of the finest examples of this. Youki's porcelain skin shimmers on the canvas, the tones blending harmoniously with those of the bed, and her hair cascades down her bare shoulders while her deep brown eyes stare back at the viewer in a wistful gaze.

The present work also features another very important individual in the artist’s life and œuvre: his cat. Named 'Mike' (meaning 'Tabby cat' in Japanese), the cat of the painting was adopted by the artist shortly after his arrival in Paris after following him home one day and refusing to leave his doorstep. The presence of a cat would go on to be a mainstay of Foujita's works: sometimes as companion to a figure, sometimes as the central subject itself. Foujita adored their individuality and recognised in them a certain indefinability and unpredictability which he also attributed to women: he is noted as saying that cats were given to men such that they could learn from them the mysterious ways of women. 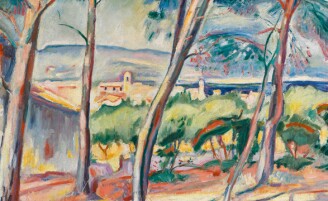