Two monumental works in mosaic and ceramic created after the celebrated French artist Fernand Léger will be offered in the Impressionist & Modern Art Day Sale in London on 20th June. Ahead of the sale we look at Léger’s legacy, his passion for working beyond the studio on mosaics and wall murals, and his ludic relationship with scale, colour, light and form.

Born in 1881, Léger first trained as an architect before moving to Paris and enrolling at the School of Decorative Arts in 1902. It was during this time that the young artist was exposed to the work of Paul Cézanne, which would have a major influence on the artist’s methodology and undoubtedly inform his alignment with the radical, new 'Cubist' movement that was gaining ground in a number of artists’ ateliers in Paris at the time.

A great contributor to the theoretical discourse around Modernism, Léger was fundamentally interested in advancing the conversation around approaches to form and object in painting and sculpture. In his 1949 essay Comment je conçois la figure (How I Conceive of the Human Body), Léger wrote: "Abstract art came as a complete revelation, and then we were able to consider the human body as a plastic value, not as a sentimental value." It is this philosophy that led to the artist’s designation as the forerunner to Pop Art. Indeed, many of his works from the 1930s and 40s seemed to presage the bold, brightly-coloured, graphic representations of objects that would become hallmarks of the Pop lexicon.

Léger was passionate about education and expanding his own knowledge, and taught alongside his own artistic projects and commissions. In 1924 he founded a free school with fellow artists Alexandra Exter and Marie Laurencin, where artists and musicians such as Sam Francis, Louise Bourgeois, Serge Gainsbourg and William Klein were students. One of his students, Georges Bauquier, would go on to become Léger’s close friend and collaborator over the course of many years, and it was Bauquier who was the first owner of these two works.

Léger saw the potential of working in different mediums early on in his career and enthusiastically explored working on a large scale. While the artist is well-known for his painting and sculpture, Léger frequently worked on large-scale murals, stained-glass and mosaics throughout his life, and his public commissions can be seen to this day. Several vast stained-glass windows are installed in the halls of the University of Caracas and the artist’s commissioned windows in the Sacré-Coeur church at Audincourt, France, draw visitors from around the world.

The exterior of the the Musée National Fernand Léger in Biot, constructed under the direction of Bauquier and Léger’s widow Nadia, is indeed also decorated with monumental mosaics executed by Heidi Melano after designs that Léger had originally intended for the Olympic Stadium in Hanover.

In the spirit of the collaborative large-scale works that Léger had begun before his untimely death, Bauquier continued to commission artisans to realise a select group of Léger’s paintings in a variety of media over the following decades, among which these works are two particularly striking examples.

La Lecture, was commissioned by Bauquier from the mosaicist Heidi Melano, after a 1924 oil painting of the same title by Léger. The original painting is faithfully recreated in the mosaic, and Léger’s flat planes of colour are translated with vibrancy and brilliance in the intricate grids of stone and glass tesserae making up each section of the image. The composition is structured around a series of contrasts and repetitions, with echoes and tensions between horizontal and vertical masses, rounded and angular forms, and hot and cold colours which Melano has recreated with extraordinary flair.

It was Roland Brice, another of Léger’s students from before the war, who first introduced the artist to the potential that ceramics, and eventually mosaics, presented for decoration on a monumental scale. Between 1951 and 1955, Léger worked enthusiastically together with Brice on his ceramics at his studio in Biot to produce one-off pieces and limited editions such as Le Tournesol ou Soleil. Léger would create the designs, paintings, colours and forms which were then executed by Brice and later his son Bruno.

La Lecture and Le Tournesol ou Soleil are thus a fitting tribute to Léger’s important, multi-faceted legacy. They serve as a reminder of his willingness to work with – and understand – an array of materials, and stands as testament to his enduring spirit of collaboration. 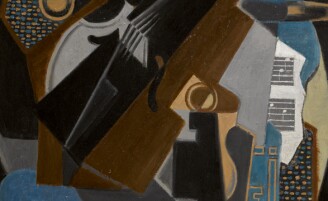