Eric Franck: Eye on a Century

O n the 19th May, Sotheby's will present a selection of photographs from the collection of Eric Franck. An eminent figure in the photography world, Franck has garnered respect for his discerning eye and the unique and well-curated collection he has amassed. He is a champion of lesser-known artists such as Heinz Hajek-Halke and Pentti Sammallahti as well as a proud owner of some of the most important works by Magnum photographers. He and his wife Louise made a significant contribution to the nation's understanding of, and access to, important photographic works when in 2012 they gifted 1,400 photographs to the Tate Collection, doubling its holdings overnight.

The highlights of this sale are without a doubt two museum-quality, extremely rare scrapbook prints by Henri Cartier-Bresson: Barcelona, Spain, 1933 and Le DDT a Dessau, 1945. The scrapbook prints are the only of Cartier-Bresson's images that he personally developed. In the belief that Cartier-Bresson had died in captivity during the war, plans for a posthumous exhibition of his work at the Museum of Modern Art in New York were underway.

He seized the opportunity to exhibit his works and began printing images, despite the shortage of photographic paper and variable electric current that persisted after the war, in order to supplement existing prints that had already been tracked down by the organisers. On his arrival in New York, Cartier-Bresson glued these new prints into a scrapbook with certain images remaining loose.

The exhibition ran for two months in the spring of 1947. Beaumont Newhall, who was involved in the initial planning stages of the exhibition, addressed Cartier-Bresson's printing technique in his contribution to the catalogue, writing: "he alone is able to recreate the tonal values which he visualised at the time of the exposure".

Franck's link to Cartier-Bresson, who was married to his sister Martine Franck, also a Magnum photographer, has no doubt given him special access to and understanding of some of the most iconic works of the 20th century. The quality of the scrapbook prints and the variety of the works on offer, are testament to Franck's unique ability not only to select the best work but also to follow his personal convictions, a sign of a truly passionate collector. His humanist vision is the common thread that runs through this diverse selection of works, the second part of which will be offered at auction in Paris in November.

Eric Franck will be in conversation with Michael Benson, Director of Photo London, at Sotheby's New Bond Street on Sunday 14 May at 3pm. 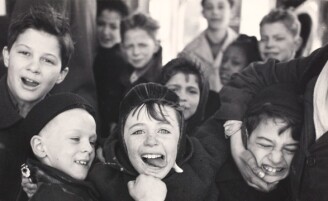 Past Auction
The Discerning Eye: Property from the Collection of Eric Franck, Part I
19 May 2017 | 2:00 PM BST | London
Stay informed with Sotheby’s top stories, videos, events & news.
Receive the best from Sotheby’s delivered to your inbox.