Dropped from the Sky: How an injured owl influenced Picasso

F riends emerge from the unlikeliest of places. Influences can drop, quite literally in this case, out of the sky. Picasso's chance encounter with an injured owl in Antibes would send ripples through his visual language, providing a major motif through the 50s and 60s, particularly in his ceramics. On offer in our upcoming Important Ceramics by Pablo Picasso sale on 10 April in London, his Gros oiseau visage noir is perhaps one of Picasso's most iconic experiments with the theme. Licked with thick black stripes, Picasso inventively morphs the radical shape of the vase into the form of an owl. Handles become wings as the base becomes feet. At the owl's breast, a witty portrait of a winking woman stares out at us. But how did Picasso's fascination with these birds begin?

Perched high above the Mediterranean coastline, an owl sat inside the medieval ramparts of the Musée d’Antibes – home and studio to Picasso and his muse Françoise Gilot for six months in 1946. It was daytime, an odd time for the famed nocturnal predator to be soaking in the view, when the photographer Michel Sima spotted it. In her autobiography, Gilot famously records that: "one of his claws had been injured. We bandaged it and it gradually healed. We bought a cage for him and when we returned to Paris we brought him back with us and put him in the kitchen…He smelled awful and ate nothing but mice."  It was the beginning of an unlikely companionship between Picasso and his feathered friend.  Françoise goes on to fondly recall their combative relationship – whenever the bird bit Picasso's fingers, the great artist would hurl equally biting verbal abuse back at the bird.

PABLO PICASSO IN HIS WORKSHOP IN ANTIBES WITH AN OWL, 1946. © MICHEL SIMA/BRIDGEMAN IMAGES

Soon the motif of the owl started to trickle out of Picasso's brush – perhaps most notably in his ceramic work at the nearby Atelier Madoura, the celebrated ceramic workshop that Picasso collaborated with. Fun, playful and light hearted, did Picasso's intellectual engagement with the theme go any deeper?

We may never know if it was just by chance that the owl also happened to be an ancient symbol of Antibes; perhaps Picasso simply attracted fate. Yet he was well aware of the mythology associated with his nocturnal friend.  A Greek symbol of Athena, suggesting courage and wisdom, Picasso would have encountered the bird time and again while drawing inspiration from the ancient Greek vases that inspired him. This interest in Greek pottery was arguably the defining factor in Picasso's obsession with his ceramics. It shows Picasso taking up the mantle of his artistic forefathers, creating a dialogue as he so often did between the ancient and modern. It was not just ancient artistic production, but also the philosophy underpinning them that fascinated Picasso – most notably the great Roman poet Ovid's interest in the metamorphosis of humans into animals. As the vase transforms into an owl, the portrait of a lady morphs into that same owl. Is Picasso hinting at his interest in Ovid's Metamorphoses?

Picasso was aware of the owl-like quality of his own face.  This combination of the personal and the intellectual, summed up by owls and Ovid,  highlights the whirlwind of associations he drew upon.

There was no medium for Picasso more wedded to the ideals and images of ancient civilisations than his ceramics. From minotaurs to fawns, his plates, vases and bowls are littered with the vestiges of the past. Despite the relentless experimentation and dizzying creativity that characterise his ceramics, he was always anchored by his fascination with the past.

This connection to the past extended even to the doorstep of the now famous Atelier Madoura, his workshop. Situated in the historic town of Vallauris – a site of clay production since Roman times – it was here that Picasso stumbled upon ceramics one summer Sunday. The year was 1946 – the same year as the fated encounter with that owl. 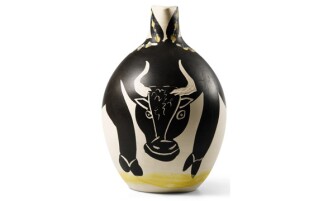