The upcoming Treasures from the Prestigious Qizilbash Collection auction in Paris on 28 November, includes works in glass, gold, gilt-bronze, porcelain and jewels. It is the result of the lifelong passion for art of Hossain and Mariam Qizilbash – who, as collectors, have devoted many years to gathering the finest examples of European craftsmanship in an unrivalled assembly of museum-quality treasures. This is the first time this remarkable 18th century tortoiseshell, mother-of-pearl and gold Piqué rosewater ewer and basin set has come to the market in over two decades, having once been in the famed collection of Sir Julian Goldsmid at his Whiteknights Park estate in Berkshire.

These highly sophisticated piqué objects were very popular amongst the nobility throughout the 18th and 19th centuries, having been collected by the British Royal Family, the Rothschilds of England and France and the Royal Court of Naples, from where these Baroque pieces originate. Upon his accession to the throne of Naples and Two Sicilies in 1734, Charles III of Spain (1716–1788) especially favoured tartarugari (tortoiseshell workers) with Queen Amalia (1724–1760) becoming a great patron of this subtle art that best expressed itself in small and delicate objects. As with these examples, the majority of items were made purely for decorative purposes, and despite their practical origins – such as jugs or basins – would not be put to active domestic use; rather, they used to decorate some of the finest rooms in Europe, such was the cost of production and the fragile nature of the resulting chinoiserie.

The distinctive shape of the imposing ewer was inspired by the sketches of master silversmiths such as Nicolas Ambroise Cousinet, working in Paris between 1696 and 1715, one of which shows a handle formed by a female figurehead. This style was popular with Italian and French craftsmen of the period, and in turn with their patrons. The central motif on the basin shows a figure riding a camel, a golden spear held aloft, while the surrounding panels are adorned with an elephant-drawn carriage, birds, monkeys and horses inlaid in gold – drawing on references from the engravings of French ornemaniste Jean Bérain (1638–1711) and the Augsburg-based Paul Decker (1677–1713).

Produced by highly skilled goldsmiths, the elements were achieved by softening the tortoiseshell and then impressing the design in mother-of-pearl or strips of gold and silver while the ground material was still at a high temperature. Other techniques included point d’or, where minute holes were filled with melted gold or silver; coulé, similar to point d'or but used to fill linear engravings, and incrusté, which made use of mother-of-pearl or gold plaques. Treasures from the Prestigious Qizilbash Collection presents a unique opportunity to acquire a piece of European decorative art history. Very few surviving examples from the Naples tradition exist, making the exquisite objects in this set extremely rare. 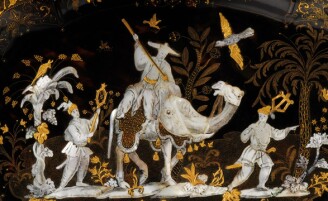