By Sotheby's
A group of paintings by Georgia O’Keeffe embody some of the modern master’s favorite motifs: the skyscraper, the calla lily and the cottonwood tree. Below, read more about the artist’s motivation to paint these subjects and watch five-time Tony-Award-winning actress Cherry Jones bring to life these exceptional works through the artist’s own words.

The skyscraper, itself a 20th-century phenomenon, was arguably the first product of American culture to attract sustained international attention, and Georgia O’Keeffe was among the first artists to adopt it as her subject matter. Between 1925–29, the artist painted a powerful series of cityscapes that critics now regard among the most satisfying, painterly and memorable of her oeuvre. A Street, from 1926, is one of the most physically imposing and psychologically penetrating works of this celebrated group. With a linear precision and tonal contrast reminiscent of photography, O’Keeffe emphasizes the towering geometry of New York and its imposing skyscrapers.

O’Keeffe’s fascination with the skyscraper began in 1924 when she and her husband, the influential photographer and gallerist Alfred Stieglitz, moved to an apartment building at 38 East 58th Street in Midtown Manhattan, eventually settling on the hotel’s 30th floor. O'Keeffe was drawn both to the expansive views of the city’s skyline and to the sense of respite skyscrapers offered from the bustle of the streets below – living within and above the thriving metropolis. “Today the city is something bigger, grander, more complex than ever before in history,” O’Keeffe said in a 1928 interview. “There is a meaning in its strong warm grip we are all trying to grasp. And nothing can be gained by running away. I wouldn’t if I could." 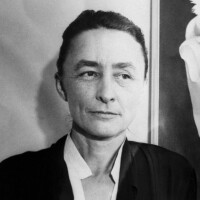 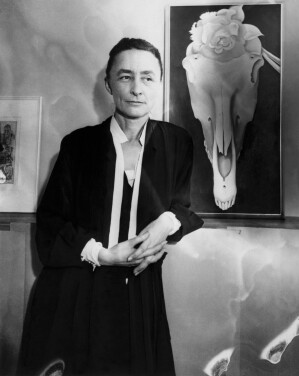 Of the various flowers that Georgia O’Keeffe painted – irises, poppies, and sweet peas among them – it was arguably in the calla lily that O’Keeffe found her ideal motif. Calla Lilies on Red, 1928, a striking, sensuous study of color and form and a magnificent example of her inimitable aesthetic, counts among her flower paintings from 1918–32 that captured the attention of the New York art world and incited endless theories on their meaning. Though she denied them, Freudian interpretations were particularly rampant for rapturous compositions like this, and many speculated as to their sexual symbols.

Modern artists were also visually exploring the calla lily during this time, including Marsden Hartley, Salvador Dalí and Charles Demuth. In typical fashion she outpaced these men, and by the end of the 1920s the calla lily had become her signature subject. O’Keeffe painted Calla Lilies on Red in 1928, five years after the distinctive flower first captured her attention. She would ultimately depict it six times that year, revisiting the blossom on each occasion with a new viewpoint or altered perspective. “I work with an idea for a long time,” she said to The New Yorker’s Calvin Tompkins in 1973. “It’s like getting acquainted with a person, and I don’t get acquainted easily.”

In this elegant composition she sets two sculptural white blossoms against an undulating leaf in a sea of modulated red. By removing these organic elements from any recognizable context, she creates an enthralling work that forces viewers to consider the formal qualities of her subject. Undeniably personal, it has also been suggested that the two flowers are avatars for O’Keeffe and her husband, who, represented by the leaf that signifies his cloak, rises up behind to envelop her.

O’Keeffe began exploring the subject of trees in a series of 1918 watercolors and returned to the theme throughout the time she spent in Lake George in the 1920s. Her fascination with the colors and forms of the feathery cottonwoods that are native to the American Southwest progressed naturally from her earlier work, and Cottonwood Tree in Spring is a daring early example of this series. O’Keeffe’s engagement with the cottonwood, a close relative of the American Aspen trees found throughout the west, represents a transition away from the circular shapes and floral imagery that garnered her wide renown. Like the master of painting en plein air, Claude Monet, O’Keeffe always utilized the natural world as the basis for her unique visual language. In Cottonwood Tree in Spring she transcends a literal study of nature to evoke the strong spiritual connection she felt with the American Southwest.