Bridging Generations: The Legacy of an Important Private Museum in Southeast Asia

Art is the key to bridging generations within a community, with works that express shared ideas of beauty and experiences of diverse cultures. In the upcoming Sotheby’s Hong Kong Fall Auctions Series, we present ‘Bridging Generations: Property from an Important Southeast Asian Private Museum’, a single-owner grouping of modern and contemporary art offered across three sales in October.

T he emergence of collector-founded private art museums in Southeast Asia have given visibility and access to art in places that would otherwise lack government support or infrastructure for art education. To meet this need, one visionary founder of such a private institution built a collection of historically significant modern and contemporary artworks on view to the general public. Given the important role of private museums in the region, the founder intended a space that would serve not as a replacement for the storeroom, but a place where interactions with art can be an enduring experience – one that can be repeated and renewed. 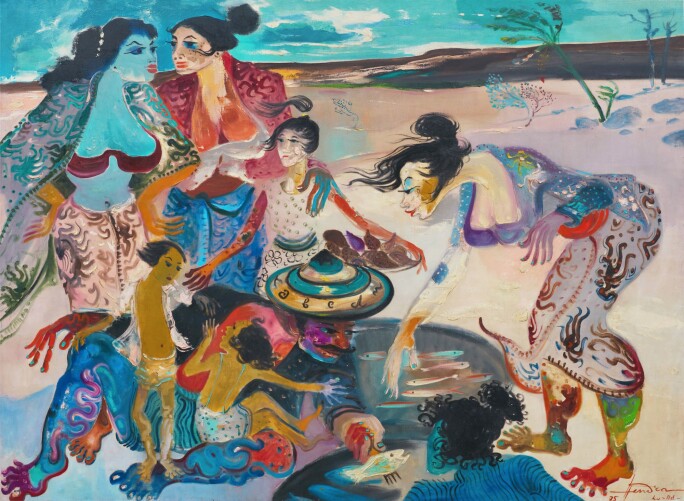 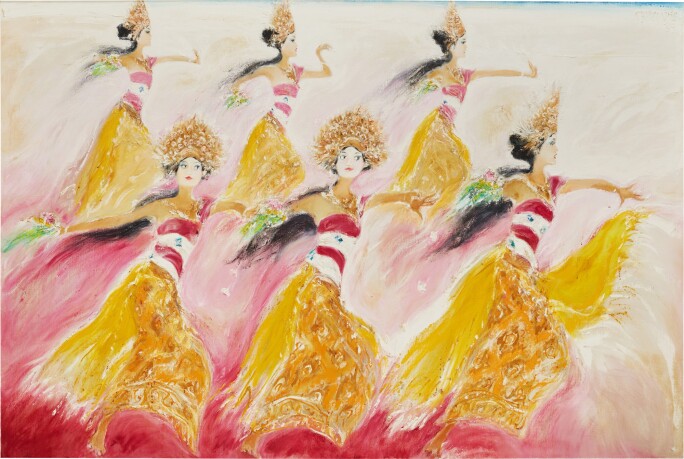 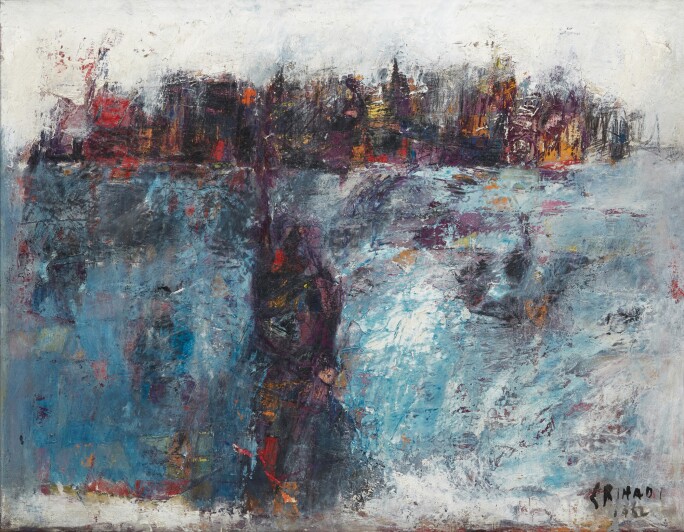 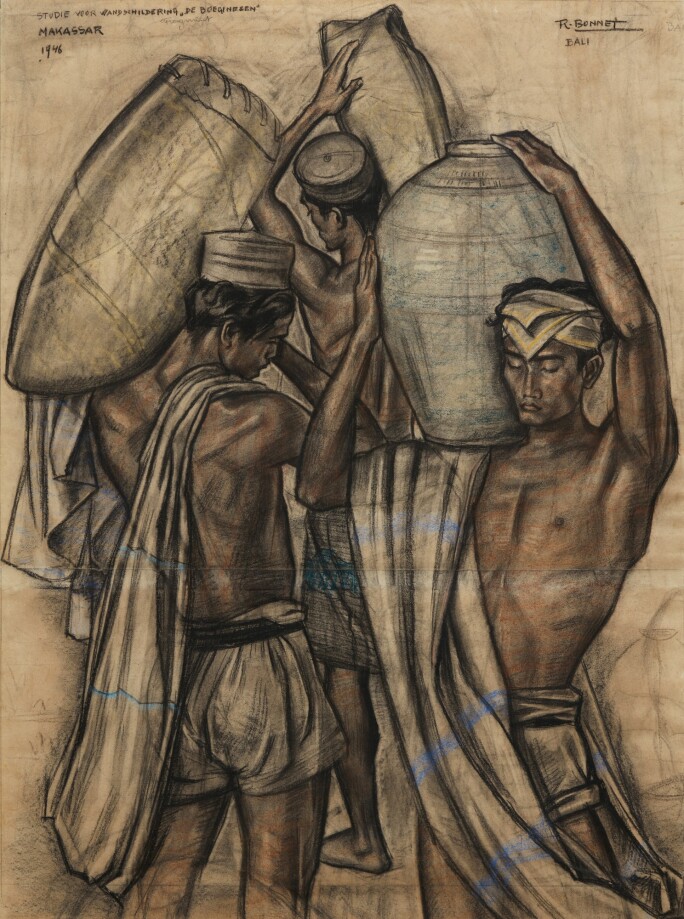 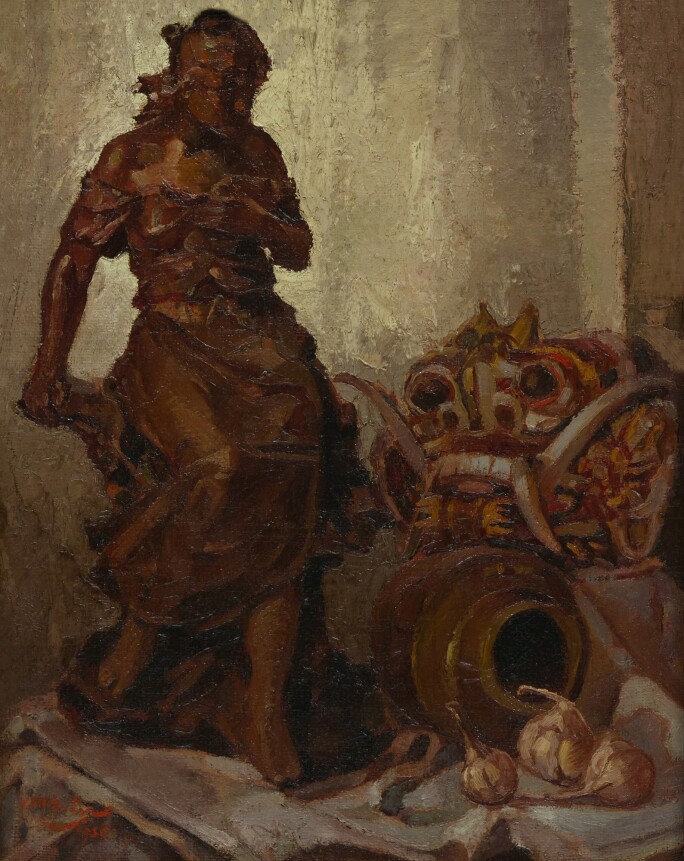 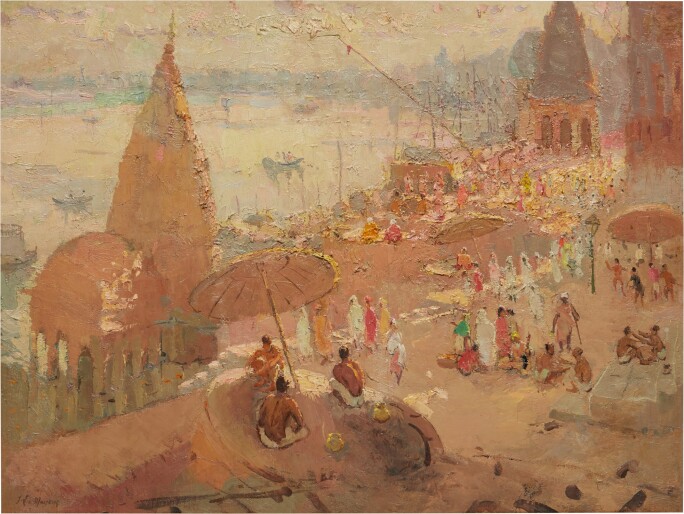 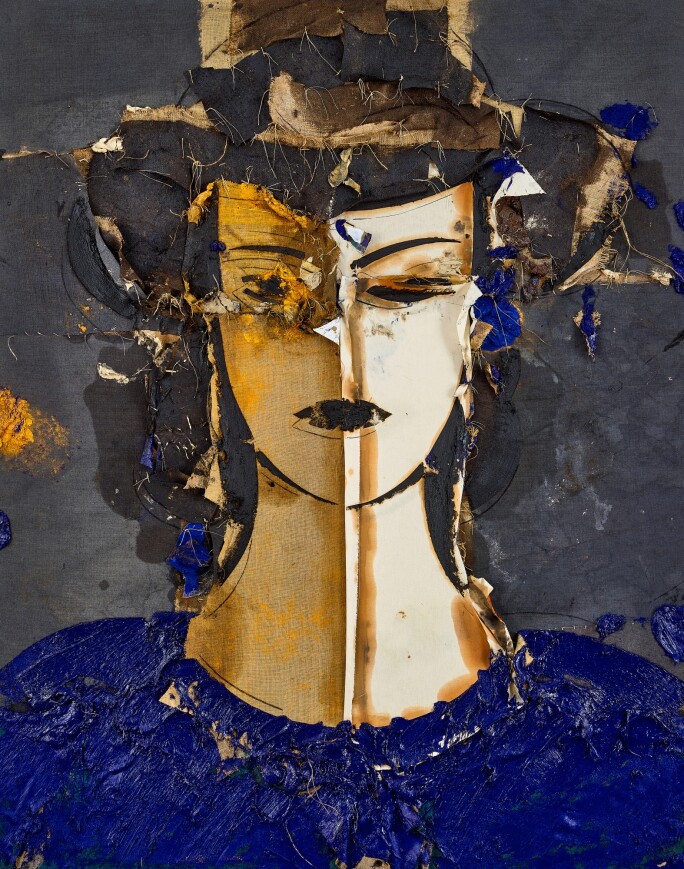 Thus, ‘Bridging Generations’ was conceived, a passion project born out of the love and enjoyment of art, and a name alluding to the collector’s ambitions to connect different era from the old masters to younger, contemporary artists. The intention is to foster an exchange of ideas through the ages which in aggregate would create a strong sense of cultural identity and a powerful connection between art and the community.

Leading the inaugural auction edition of the ‘Bridging Generations’ series is Hendra Gunawan’s Fish Market, a painting that brims with optimism, imagination, and chromatic effervescence, representing a triumph of the artist’s spectacular opus. Through his own unique artistic language, Gunawan composes a sublime visual poem that expresses a powerful inner resilience and inimitable aesthetic at a defining period in the artist’s life. Painted during his imprisonment, Fish Market reveals the conjured images of Gunawan’s memories and imagination as he recalled the everyday rituals of the Javanese people. His long incarceration prompted a period of reinvention toward Gunawan’s mature style, which Fish Market exemplifies through its radiant fusion of color, and the exaggerated elongation of figures.

“One might say that, for various biographical and political reasons, [Hendra Gunawan] chooses to use the female form to signify the greater truth and beauty of the land and people which he simultaneously celebrates and longs for in his work."

Exuberant and monumental, Srihadi Sudarsono’s Tari Pendet is the largest composition of dancers to be offered at auction. Srihadi long and prolific career has traversed the transition between modern and contemporary art movements in Indonesia. The artist portrays the inner spirit and essence of his subjects, reflecting Srihadi’s deep understanding of culture and arts across all genres. Tari Pendet celebrates the aesthetic principles of the titular dance, linking the non-verbal, esoteric concepts of beauty and strength through meditation and spiritual transcendence. It was the artist’s desire to express the harmony between mortal-physical and transcendental-spiritual that made Indonesian dance a beloved theme in Srihadi’s oeuvre.

“I truly understand dance. If we examine closely, every dance has its pakem or vocabulary of movement and type of costume, all of which are imbued with philosophical meaning. The body language of a particular dancer adds its own particular nuances to the character of the particular dance. The spirit of a dance varies, depending on who performs it. How can it be possible to repeat oneself?”

Born and based in Bandung, Christine Ay Tjoe is one of the most sought-after female contemporary artists. Executed within the same two years, Three Actors with the Blood 01 & 02 and Wall Prison are early examples of Ay Tjoe’s diverse oeuvre as she explores mediums of photography, painting, sculpture and installation. The doll-like figures that populate both works were crafted from materials, such as stockings, wire and string. These are all materials we might be able to find in our homes, suggesting notions of play, religion and human relationships. Both works should be understood as stages or phases in the process of creation, which would inform her largely abstract paintings that sometimes incorporate figures whether partially or in nature. Embodying the emotional quality and thematic vivacity of Ay Tjoe’s oeuvre.

My interest point is human beings. In my works, I talk more about what will happen in terms of human trends, local or global; what I see as possibilities in my mind, personal ideas.

Capturing the skyscrapers and skyline of New York in a flurry of brushstrokes evoking winter snow, blistering wind, and the buzzing energy of the city that never sleeps, New York by Srihadi Sudarsono is a rare and early work by the modern master. One of the leading voices of the Bandung school in Indonesia, Sudarsono unique idiom is a bilingual bridge between abstract expressionist and figurative art. With a palette knife he works the surface to show the blurred silhouette of the Statue of Liberty in the foreground, while the tall buildings in the background reflect into the water.

Born in 1895 in Amsterdam, Rudolf Bonnet boarded a steamer for Indonesia in 1928 and settled in Ubud, Bali a year after. He was a witness to the rapid changes in Balinese culture brought about through its interaction with Europeans. Along with Walter Spies, Bonnet founded the Pita Maha movement of art in 1936 in order to professionalize pre-existing Balinese art forms, ultimately shifting its aesthetic focus from religious chronicle to an account of everyday life. The present lot was a Study for a Mural 'The Buginese' which he would later paint in Makassar. The figures appear with such refinement and dignity – the depiction is an exaltation of the common folk at the hands of the artist.

East Meets West is still life of a Balinese Topeng mask and a Roman style statuette of a girl. It is a painting that embodies the merging of diverse artistic traditions at the heart of Lee Man Fong’s pursuits. An early work from the Chinese Indonesian artist’s career, this paintings displays Lee’s training in the Netherlands and pays tribute to the Dutch tradition of still life painting. The juxtaposition of European sculpture and Indonesian mask making presents a truly enchanting scene as both images come to life under the artist’s deft and expressive hand.

The Belgium born Adrien-Jean Le Mayeur de Merprès, was a self-declared impressionist, his perpetual search for light brought him to far flung lands, and eventually to Bali, Indonesia. Perhaps deeply affected by the violence of the war, he sought a retreat in the exotic worlds depicted by the French post-impressionist artist Paul Gauguin and developed a voracious appetite for travel. His search for paradise led him around the world in the 1920s including Italy, North Africa, India, Cambodia, Burma, Madagascar and Turkey, depicting the foreign scenes before him in fluid sensitivity. La ville qui s'endort, Benares represents the very best of Western Impressionist approaches and a reverent eye of the landscape and its people.

“Beyond representation or abstraction, beyond the references to informalism or to the Pop aesthetic, what defines and distinguishes Valdés’ work is its compositional structure, its syntax in creating images, in its confrontation between color and material, between form and construction, between line and texture, between melancholy lyric and arte povera atmosphere.”

One of the most important Spanish painters of his time, Manolo Valdés pays homage to the masterpieces that have shaped Western cultural traditions, through a distinctive re-evaluation of iconic imageries and infusing the classical works from both the Old Masters and Twentieth Century icons with his contemporary vision. Through this alchemy of the past and present the artist is able to re-invent illustrious visual experiences, a translation invigorated by a deep appreciation and understanding for the detailed facets of art history. Lillie X is an example of Valdés' rejuvenation of the traditional genre of portraiture. The stark geometric composition and distinct divide between the two halves of the female face recall the style of a cubist portrait, a look towards Valdés’ great predecessor Pablo Picasso and the great painter's own earlier variations of iconic masterpieces. In their own right, both artists evoked their own heritage, in effect bridging generations.