Beyond Picasso: the Cubism of Filla and Foltýn

C ubism — while most commonly associated with Pablo Picasso and Georges Braque — in fact developed concomitantly in Paris and Czechoslovakia as a result of a creative dialogue between artists in both centres. It became a movement in Prague, Brno and other creative hubs, where artists never simply imitated the Parisian style, but developed their own forms of Cubism, embracing elements of Expressionism and Symbolism and opening the field to approach religious and mythological subject matter. In the typically Cubist manner, they went beyond reason by freely merging elements of a subject from different angles, leaving room for the imagination of both artist and viewer to play their part. Ahead of Sotheby's sale: 20th Century Art — A Different Perspective — we take a closer look at two of the Cubist artists whose works are featured.

Pioneer of Czech Cubism, Emil Filla, spent extended periods of time in Paris during the crucial pre-war years 1911-1914, when both Picasso and Braque created some of their most iconic works such as Picasso’s Bottles and Glasses of 1911-1912 (Solomon R. Guggenheim Museum, New York). Filla visited their studios where he found much inspiration for the huge Cubist oeuvre he would create throughout the rest of his life in Czechoslovakia. Enduring the catastrophes of two world wars, the artist was open to more spiritual subjects and approaches, as was his contemporary and countryman František Foltýn.

Comparing Filla’s Seated Woman with Picasso’s Dora Maar au chat (fig. 1), both painted in the 1940s, the similarities are striking. Both women command the picture plane, Dora sitting in a wooden chair and Filla’s inconnue posing in front of one.

Foltýn created some of the finest Czech Cubist works at the artists’ colony which formed around him, Sándor Bortnyik  and others in Košice. But throughout his life he radically changed his style several times and would later become one of the country’s leading abstractionists. He went to Paris in 1924, ten years later than Filla, where he was exposed to the art of his fellow Czech painter and teacher František Kupka and the anti-narrative tendencies in vogue in France at the time.

Foltýn’s masterpiece from 1922-24 shows a calm scene of a mother and child enthroned in the countryside of his homeland. Eyes cast down she sits tall, showing off a fantastically modernist blue dress. Trees and clouds have formed a royal baldachin above them and the three mountaintops in the background could symbolise the presence of the holy trinity.

Filla’s Seated Woman, painted about twenty-five years later, demonstrates the development of Cubism from the sharp outlines of the subject in Foltýn’s work, to the flowing forms and further abstraction in Filla’s painting. His figure wears no clothes at all, posing confidently in front of her chair and looking us right in the eye. Her body is much more distorted than that of the Madonna in Foltýn’s work and apart from the red lipstick, nail varnish and rose, the choice of colour is no longer natural. It is fascinating to see the progression of Cubism in two Czech masterworks. 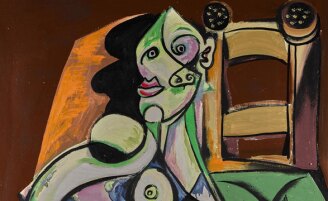