Andy Warhol, Printmaking and The Trials of Superman

What is a trial proof?

A trial proof is a site of experimentation for the printmaker before the creation of the numbered edition (the controlled number of prints released by a publisher). A trial proof is similar to the concept of a draft; the proof presents the opportunity to try out a preliminary composition and color combination, subject to further revision. After printing a series of trial proofs (frequently inscribed ‘T.P.’), the artist often selects a proof on which to base the numbered edition.

The silkscreen printing process, in particular, allowed Andy Warhol to test various color schemes and compositions. A silkscreen stencil could be reused many times and recoated with various colors of ink. Many of Warhol’s silkscreen print portfolios produced during the 1960s and 1970s, such as the Flowers series (F. & S. II.64-73), lot 47 in our upcoming sale, demonstrate the artist’s interest in reprinting one image in a variety of color combinations. For these portfolios, Warhol would create a substantial number of proofs and choose a set to be editioned.

What is a Trial Proof Edition Print by Andy Warhol?

From 1980 to 1987, Warhol created unique works called Trial Proof Edition Prints. During this time, Warhol began to print portfolios of images that were united by a common theme or topic, such as the Myths series, a portfolio which included images of folkloric characters from contemporary pop culture, including Santa Claus, Mickey Mouse and Superman. Because each image in the portfolio was different, Warhol did not have the same opportunity to experiment with color and composition within the editioned set. Warhol decided to extend his editions to include trial proofs of each image in the series. Each trial proof is a unique print, exhibiting a distinct color combination and variation in compositional elements.

The colorful Superman (F. & S. II.260), Lot 48, was printed for the numbered edition (25/200). The black and white screenprint, Superman (F. & S. IIB.260), Lot 49, is a trial proof. Looking at these prints in tandem, the viewer gains insight into the artist’s creative process. One can observe how the artist experimented with the placement of the images of the soaring Superman, the repetition of the ‘Superman’ title and the colors.

For the impression from the numbered edition, the artist opted to color one Superman in his traditional blue and red suit. Overlaid on top and just to the right, there is another outline of the hero. His feet and the tail of his cape are colored an electric blue, which transitions to a glowing red at his raised fist. Both iterations of the figure are set against a deep black background. The bold color palette and superimposed hues create a sense of drama and reinforce the image’s familiarity.

Examining the trial proof closely, one can see how the same image of Superman was incorporated to different aesthetic ends. In the trial proof, the artist again layers two iterations of the Superman, this time on a white background. At the center, the artist prints the figure’s outline in black and then prints the image again in a film of diamond dust. The black-contoured Superman appears to surge up, leaving a glittery after-image in its wake. The effect is one of movement and levity. Viewing these prints side-by-side is a rare opportunity and reveals Warhol’s limitless ability to generate innovative and captivating imagery. 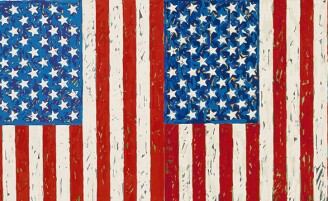