An Artistic Tour of Paris Landmarks

The popularity of Paris’ vast western park, the Bois de Boulogne, significantly increased during the 19th century with the establishment of the Longchamps racecourse and picturesque carriage trails for the elegant set to see and be seen. Given its proximity to the swanky 16th arrondissement and its posh inhabitants, the Bois de Boulogne was the Hyde Park of Paris, the place to be whether enjoying a day at the track, socializing out of doors or strolling in its manicured gardens. While Jean Dufy’s Le Bois de Boulogne depicts the elegant, equestrian nature of the Bois, Albert André gives us a snapshot of Paris of yesteryear. The title, L’Avenue du Bois de Boulogne, refers to what is now known as Avenue Foch (as of 1929) which runs from the Arc de Triomphe to the edge of the Bois itself, and has been, since its creation, one of the chicest addresses in the city.

The Place de la Concorde, Paris’ largest public square, is as storied and complex as the city itself. Originally named for the King Louis XV, the square housed the guillotine during the Revolution. In a dynamic aerial view of the square by one of Paris’ most prodigious depicters, Jean Dufy, the iconic obelisk of Luxor is positioned at the center. The Hôtel de Crillon can be seen on the left of the rue Royale; this landmark, which reopened last year after lengthy restoration, was chosen in 1778 for the signing of the French-American treaty, by which France officially recognized the United States and the Declaration of Independence. All the way to the north, dominating the horizon line is the Sacré Coeur Basilica on Montmartre. To the left, and just outside the frame of this image, is the American Embassy.

Neuilly-sur-Seine, which begins at the northern limit of the Bois de Boulogne, is an elegant residential area sought after by the wealthier inhabitants of the city after King Louis Philippe chose the Chateau de Neuilly as his preferred residence from 1830–1845. As Neuilly is just outside Paris, the tramway linking it to the Arc de Triomphe within the city proper was extremely popular as soon as it opened in 1874. By the 1890s there were three tram lines linking Neuilly to Paris permitting greater mobility to its inhabitants and opening up the area to others. Montezin’s Tramway sous la neige à Neuilly depicts one of these tramcars in the snow – a graphic, impressionistic snapshot of the cutting edge of public transportation at the time.

Henri Martin’s Marie-Louise et les enfants takes us across the Seine to the picturesque Jardin de Luxembourg. Once the private palace of Marie de Medici, it now houses the French Senate. Henri Martin selected this iconic location for his five-panel mural, commissioned to decorate the Mairie of the 5th arrondissement. It is not a surprising choice of subject matter. The internationally famous gardens are a magnet for countless Parisians of all ages who flock there whenever the sun is out to enjoy the open vista surrounding the fountain and toy boat basin, the tennis courts and the variety of small secluded statuary gardens which all serve to give the Jardin de Luxembourg a more intimate feeling, with less of the monumental, rigorously and geometrically groomed French style that can be found in palace gardens like Versailles. 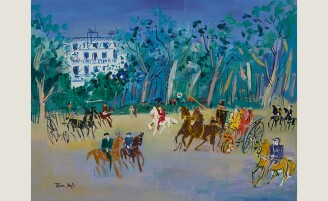