Actor Norman Reedus on Photography and Finding Beauty in the Macabre

N EW YORK – Even before Norman Reedus became known as an actor, starring in The Walking Dead and Boondock Saints, he found a means of expressing himself: photography. What began in junior high and high school photography classes soon developed into a more serious occupation when Reedus moved to Los Angeles in his early twenties and put on art shows with friends from Otis College of Art and Design. Now, photography is a passion Reedus pursues as he travels the world. Many of his fascinating images – at once intriguing, unsettling and playful – can be seen in his debut book The Sun's Coming Up… Like A Big Bald Head (Authorscape Inc.), and two of Reedus’s works will be offered in Sotheby’s 28 September Postwar and Contemporary Photographs auction. Ahead of the sale, we spoke with Reedus about the allure of the macabre, his ongoing fascination with masks and his favourite artists.

Many of your images have an unnerving, almost macabre element to them. What attracts you to dark subjects?
I didn’t realize I was doing that until people told me. I really didn’t. I’ve directed a couple of short films, and people said the same things about those. In acting, I’ve always said that I like seeing the contrast. I like it when angels stab you in the back, and devils break down in tears. A lot of times, maybe because of the way I look, I’m cast as a murderer or somebody with a troubled past. Finding the good qualities about those characters is more interesting than playing a one note bad guy. I think I kind of do that with photography. I like to find the beauty in images or situations that seem sort of macabre or grotesque even.

You mention contrast. Many of your photographs have an innocent, charming or even funny quality alongside that unnerving element. Is that juxtaposition important for you as an artist?
There’s something playful to those grotesque images. In one photograph I took off set, I have a girl covered in fake blood sitting on a sofa in my trailer. It was fucking hysterical shooting that. I had all the teamsters yelling at me, because I ruined the sofa and there was blood all over my trailer. Some of those images might look grotesque to a viewer, but they’re all very fond memories.

What do you hope people take away from your photographs?
I don’t know if I hope they take away anything. I’m not trying to sell anything. I feel like the whole point of all of it is to just make people take a step back, get quiet for a second, and think. They can come to their own conclusions after that.

How does your technique contribute to your photographs? I noticed you use a lot of close-ups, stark shadows and dark exposures.
A while ago, when I was trying to learn bass, I asked a friend who plays in a rock band what kind of bass I should get. He said to get the one that feels the best in your hands, because you’ll use it the most. I do the same thing with cameras. I pick up a camera and use it for a couple months, then I’ll find a new one and play with that for a while. But I’ve always fucked with shadows and the contrast with light, because sometimes you’ll find different things in there. It will change the mood.

Looking through your book, a few motifs jumped out at me – masks in particular. What do they symbolise to you?
I’ve always been into masks. I probably have 1,000 at home. I put them on little kids, animals. Sometimes a smiling face even resembles a mask, if you shoot it at an angle. There’s just something about them. I think it’s weird that if you look in the mirror you see one version of yourself. Then if someone looks at you dead on, they see a different version of you. I’m also interested in the way you carry yourself behind a mask. I’ve always liked horror films. My favourite movie as a kid was The Omen. In grade school I liked to pretend I was Damien and stare at my teacher until I scared her.

Tell me about your two photographs in the Sotheby’s sale. Both were taken in a Russian prison – is there a story behind that?
I was doing a movie in Moscow and St Petersburg with Chris Solimine and Andrei Konchalovsky. Konchalovsky is like the Francis Ford Coppola of Russia, and he got access to a lot of places that I normally never would have seen. One of those was a max-security prison. One thing is for certain – I never want to go to jail in Russia. We were shooting one day down in this sub-basement there. The walls were this crazy green colour. I could see two prisoners who were working in the kitchen peek around to look at what was going on. Every time they did, a guard would come bang his stick and yell at them. And they’d run back around the corner. So as soon as that guard left I whistled. Right then this kitten ran around the corner and both the guys peeked around the corner. The guys looked like supermodels. The photo stood out to me because I didn’t know what I was going to get, but it looked like a staged photograph. That was one of those lucky accidents where you go with your gut.

What about the photograph you took in the prison's exercise yard?
I was walking around the exercise yard with the director, and we could see these tiny windows all around the prison. There would be a face barely visible or a hand hanging out or smoke coming from one. The feeling was so fucking dark. I took a bunch of those photographs walking around. It was an interesting contrast because the night before we were at a military base and all these young kids were sticking their hands through a fence to shake my hand. They were super friendly and wanted to talk and trade cigarettes. The next day at the prison it was the opposite feeling. I chose this photograph because you don’t know the story of the person who owns that hand. He knew I was taking pictures. That’s all he chose to show me.

To discover which works from Postwar and Contemporary Photographs caught Norman Reedus's eye, click below. 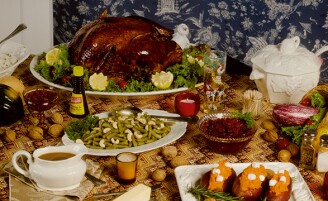