The A-Z of Jewelry

O pen to interpretation and utilized in a variety of designs throughout jewelry history, the X-shaped motif, is recognizable yet not easily explained. The simple intersection of two lines at an angle, the X motif can be considered in a myriad of ways. Jewelry designers have used it to symbolize love, as the universal symbol for a kiss – who can forget Paloma Picasso's famous “X’s” and “O’s” graphic “Graffiti” series? – whilst others have applied it in stylized design forms, to add whimsy and movement to a piece, seen in jewels from some of the most famous jewelry houses: Jean Schlumberger for Tiffany & Co., Verdura and Oscar Heyman & Brothers, just to name a few.

Creative genius runs in her blood. The French-born daughter of famed artists Pablo Picasso and Françoise Gilot, Paloma has brought innovation and passion to her swoon-worthy jewels since her first collection’s inception in 1980. One of her most iconic designs, “Graffiti”, inspired by the graffiti that filled New York City walls in the 1970s, was led by her “X” and “O” series, the “X” representing a kiss, the “O” a hug. Her Graffiti jewels are both spontaneous and sophisticated – like the “X” and “O” you would find scribbled (or carefully drawn) in a hand written letter. Paloma’s bold and feminine designs have attracted buyers for decades – they can be considered wearable art, fabricated in a variety of materials, from simple, high polished gold to vibrantly colored gem-set stunners.

The French word ‘Croisillon’ which translates directly to mean “cross-brace” is the “cross-beam connecting between arches that is meant to add rigidity to the construction of mining tunnels.” Whilst this definition may not spark joy and intrigue in the heart of the reader, jewelry mastermind Jean Schlumberger found beauty in this simple utilitarian form and it became a facet of his signature enamel bangles, worn by women of enviable style, including Jackie Kennedy Onassis. Schlumberger’s individualistic, trailblazing designs were influenced by his surroundings, flora, fauna, and architecture, finding beauty in some of the most mundane shapes and materials, such as the cross brace and twisted ropes, and even combining them into some of his most iconic designs, still in production and at Tiffany & Co. today.

Other famed jewelry houses, Verdura and Oscar Heyman & Brother have also utilized the X motif to add both movement and aesthetic beauty to their alluring jewels. Verdura plays with texture and shape as the intersection of two stylized feathers, adorned with diamonds, forms the clasp in a splendid cultured pearl torsade bracelet.

Whereas Oscar Heyman uses perfectly proportioned diamond-set X motifs to connect and enhance the striking cabochon emeralds in a wearable, yet impressive bracelet. 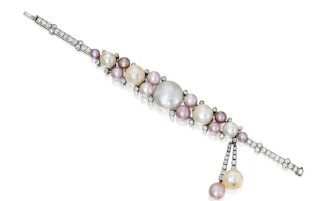