M ad May Day perfectly encapsulates the two abiding and intertwined influences on Alan Davie’s work of the 1950s and early 1960s: American Abstract Expressionism and the free-flowing forms of modern jazz – the latter being on the turntable in his studio as he paced around his paintings, laid out on the floor, attacking the canvas in a style reminiscent of Jackson Pollock. It is currently available for private sale – please contact Simon Hucker, Co-Head of the Modern & Post-War British Art Department, for more information.

Davie was one of the first British artists to encounter the radical forms of abstraction coming out of New York post-War. In 1948, whilst on a travel scholarship, he found himself in Venice for the first Biennale after the ceasefire, where he saw the new American painting up close in Peggy Guggenheim’s collection (Guggenheim herself was to become an important early supporter of Davie). There are a number of aspects of Abstract Expressionism that were to become central forces in Davie’s work: its monumentality, its (mytho)poetic ambition – both of which are very much in evidence in Mad May Day – and, in particular regard to Pollock, its commitment to a highly-charged, all-over surface that moves the viewer’s eye to the edges of the picture’s physical limit, with no seeming middle or end.

Davie also drew from the earlier work of Pollock and Rothko, before their immersion in total abstraction, when their paintings were still Surrealist in timbre. Indeed Davie’s work of the late 40s through to the early 60s can be seen as a wonderfully intuitive and free elision of these two phases of American painting, holding in perfect balance a sense of mysticism and of symbolic images glimpsed through a veil of ritual, alongside a sensuous, flowing surface that is all about the power of colour and the energy of a brushstroke, as Alan Bowness termed it: "not pictures of anything, but experience itself, caught in terms of paint" (Alan Bowness, in Alan Davie, Methuen, London, 1963, unpaginated).

What gives Davie’s work its unique quality is that it allies Pollock’s surface with an overwhelming sense of joy, its colour is more expansive, the formal energy less aggressive and more humane: his black lines, sometimes dripped but often brushed, feel more like informal handwriting than a confining, tensioning web. The source for this can perhaps be traced to Davie’s other key inspiration: jazz. Davie was a talented saxophonist, performing and recording throughout his life. Improvisation, so important to a jazz musician, equally was essential to his practice as a painter. Like jazz, his works are loosely structured, but not unstructured, in that they have repeating or counter-point melodies, riffs and returns. In this sense Mad May Day is classic Davie: it unfolds before the viewer like a piece of music, offering a multitude of starting-off points from which to explore. As Michael Horowitz noted, Davie’s "most highly worked paintings are the upshot of his dissatisfaction with any one implication – like John Coltrane on his marathon sax solos, he sets out to embellish every possibility the theme can hold" (Michael Horowitz, op cit., unpaginated).

By the time Mad May Day was painted, Alan Davie had become a major figure in post-War British art. He had shown across the globe – from South America to the Far East, Paris to Auckland – and was fêted too in America, having held his first solo exhibition at the cutting-edge Catherine Viviano Gallery in New York in 1956. And this painting itself, majestic in both scale and sheer energy, is entirely illustrative of this moment in time, of a painter working at the top of his game.

CLICK HERE to enquire about Alan Davie's Mad May Day 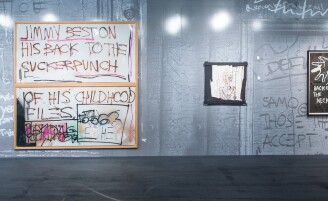