A Lifetime's Passion: Sir Michael Smurfit on his Art Collection

Your collection is vast and has been built up over the years, but let’s go back to the beginning. What was the first piece of art that you remember buying?

Well, it was my first wife who got me interested in Yeats. I had never heard of him before, I was too immersed in my business. Having built three or four big houses in my lifetime, the thing that strikes you is that the walls are empty. What are you going to put on them? And of course, at the beginning, I hadn’t very much of a clue, then slowly but surely I became interested in art, primarily through my first wife, and then the late Tony Ryan of Ryanair, who was a great friend of mine. Tony had a superb eye for Irish art, and he got me interested in other Irish painters too.

I began to think about building a collection and I started buying various pieces of art, mostly through Sotheby’s. I’ve always enjoyed hanging pictures on my walls, and getting pleasure from them. I decided early on that I was going to support Irish artists, some of them, such as Sir John Lavery and Sir William Orpen, were what we would call 'West British', as I am myself. I was born in England, but grew up in Ireland.

Was it that connection that piqued your interest in those particular artists?

It was a natural connection for me, and I very quickly cottoned on that there was value in collecting the best pieces possible. And at that time, there was a resurgence of interest in Irish art, and there were three or four of us collecting at the same time. There was John Magnier, Tony Ryan, myself, and one other who I can’t name because we kept it very private. We were competing with each other for the same pieces, because we all wanted the best. It was a good time for the auctioneers, and a good time for the sellers, but it wasn’t a great time for buyers!

So would you say that there was a friendly rivalry between you then, or was it more serious than that?

That was going on in the background, certainly. A bit of macho stuff.

Did competing against friends make it more fun?

It was a bit like playing a good sport, essentially. You didn’t appreciate it if you lost, I can tell you!

Let’s talk about The K Club; how it was established and the role that the collection played in that.

When I was building The K Club, on behalf of the company, Jefferson Smurfit Group, I was determined to make it the best hotel in Ireland, which it became, and is the only red star hotel in Ireland. A truly five-star luxury resort with golf, tennis and badminton and horse-riding amongst many other facilities, and it was very exclusive. It was priced at £150,000 for a 50-year membership, and we sold out.

So again, I was faced with empty walls. I had to start afresh with every single part of the hotel and rooms. I was determined then to buy a lots of antique furniture. At the time, I went to Sweden quite a lot, buying furniture for the Club, and during that process I bought some paintings. That is where I fell in love with Carl Larsson.

So at the same time you’re collecting art, you’re also collecting furniture and pieces for the hotel? Did you consider the two things side by side, or was it a cohesive collecting process?

It was a very cohesive collecting process. I wanted to have some authenticity in the place, so sourcing original pieces was very important. I didn’t buy hundreds of items, but I bought ten or twenty nice pieces that fitted in. It had to fit into the profile of the house and the extensions that we did. The hotel had 144 rooms, and no two rooms are the same.

Every room had its own personality, so to speak?

Absolutely. That was the whole concept for The K Club. Different paintings and a different feel for each space. All original.

We touched briefly on your passion for Irish artists, and the beginnings of your collecting career, but one thing that strikes me when looking through the works is that portraits seem to be a strong focus. What it is about paintings of people that appeals to you as a collector?

I have always loved beautiful portraits. When I was relaxing in my drawing room, I was surrounded by attractive, smart, erudite ladies of the past that fitted in. I didn’t have ugly paintings at all, the idea was to enjoy the pictures!

Not every collector necessarily acquires work like that; many people buy because they like the way a picture looks, but there are many who also invest for the value or market potential. Would you say you are led by one or the other?

It would have to be about both for me.

So it is important to you to live alongside your collection?

Yes, but it’s a constant reorganisation. I have a home in Marbella, which is 55,000 square feet, but I quickly realised that as it’s oceanside, I couldn’t take certain works to the house as we live with the doors open and the atmosphere would ruin the works, especially those by Irish artists, painted in a cold climate. It’s a very large home to fill, but when your walls are full, works end up going into storage, and it’s not much fun having paintings in storage, I found that out! You can’t appreciate something that’s in the cellar.
The time has now come for me to pass some of them on and I have decided therefore to put them to auction. I hope others will be able to gain the same excitement and joy from them as I have done.

Yours is a very cohesive, coherent collection, that has obviously been crafted over the years, but
the works are quite diverse, and I wondered has that always been a deliberate choice?

Not really, I think it’s more to do with when opportunity comes to pass, not to pause. If something came on the market that took my fancy, I would bid for it. Sometimes I would get it, sometimes I wouldn’t. More times I wouldn’t in fact, than I bid. I would say the scale of that would be 5:1, if I got one I lost five.
I had a special man going to London to bid for me. He was a very dapper, unobtrusive man, who would just bid quietly away and I would be behind him, and they wouldn’t know that until after the auction, when I won, and even then we tried to hide it.

You wanted to keep a low profile?

What advice would you give to young collectors starting out on their journey, or even, advice you would have given yourself, when you were starting out?

I think it depends very much on the home you live in. If you live in a small apartment, or in a very large house, that, to some extent, determines what you should be doing. Someone in Ireland bought a painting from me during the height of the boom, and he took it to his home where it hangs over the fireplace, and it’s quite out of place because it’s so big, it’s twice the size of the fireplace. I wouldn’t advise that at all. Start small and start filling your walls up with things that you get pleasure from. So, it’s a question of the home you live in and ensuring you have works that you enjoy on your wall.

Is there anything over the years that you regret not buying? The one that got away?

Too many I’m afraid.

This question can often be a sore point with collectors…

There was a couple of Larssons, which were up for sale in Sweden that I missed out on. There’s quite a number of paintings other than Yeats that I was interested in, that I just didn’t get a handle on, or didn’t pay enough attention at the time of the auction because I was busy and couldn’t take the call – this was before mobile phones of course. One that really sticks out in my mind is a Lavery painting, that I bid on and lost and I was told it went to America. I was quite upset.

One evening Tony Ryan invited us for dinner, and after the meal, unveiled his latest purchase – and it was the one I had lost. He said “you were the one against me”, and I replied “you were the one against me!”
It was a very amusing dinner, at the end of which he actually offered the painting to me. He was so generous, he said: “I’ll give it to you”. And of course, I wouldn’t take it. What a gesture. He was a great friend of mine, God bless him. He died too young. 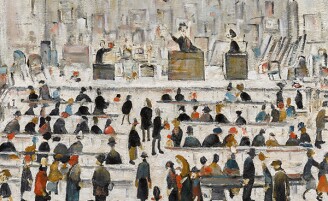