A Hymn of Praise to France’s Most Riveting Wines

T he knowledge and passion for wine of the consignor shines through in the sheer quality of the châteaux, domains and properties to be found in the dazzling array of vintages and bottle formats that feature in the three-part sale A Monumental Collection, From the Cellars of a Connoisseur, Part II of which is in London on 29 March.

When enthusiasm overtakes consumption, new homes need to be sought for great wines that can either be drunk from now, or cellared for a few years, according to taste. The scope is enormous, since the vintages range from the 19th Century to recent years, with all the standouts along the way.

Above all, this sale is a hymn of praise to France’s most riveting wines, the names one seeks out with thermal imaging precision.  The vast majority of them are here, from First Growth Bordeaux, to glorious Burgundian Grands Crus and the Rhône’s rarities.  It goes without saying that many of these wines are extremely difficult to source, whether due to small production/tiny vineyard holdings, leading to allocation wars, or because of the undisputed fame of the wine and vintage.  It is also a given, naturally, that wines tend to disappear in the normal course of events.  So, it is a boon when collections of this size and grandeur come on to the market, with the background of perfect professional storage behind it.

This is a dream ‘comparisons sale’, where judicious buying gives the opportunity to juxtapose Haut Brion with La Mission Haut Brion, Lafleur with Petrus, Ausone with Cheval Blanc, just to name a few Bordeaux icons with fascinating stylistic (read ‘terroir’ here) differences.  Or play around with the Chambertins and their satellites in Burgundy and, if circumstances permit, put out the whole panoply of DRC Grands Crus to observe their extraordinary nuances of scent, flavour and personality.  Having just done this exercise with the DRC 2014s, I can attest that this remains one of the most rewarding aspects of five decades in the wine trade (and at least another just sipping the stuff).

The Rhônes abound in Syrah splendour, with Ermitage and Hermitage to the fore and Côte Rôtie from Guigal right up there, plus Beaucastel’s hugely impressive Hommage à  Jacques Perrin from the south, a mega-complex Mourvèdre-dominated wine that deserves some work in the kitchen to produce a dish that makes it sing – try a Provençal beef daube.

Veering off the French piste and into Italy, the consignor’s love of Piedmont’s best reveals itself in wines from Aldo Conterno, Sandrone, Vietti and Gaja, while Tuscany is not forgotten – how could it be with Sassicaia, Soldera and Solaia.

And there is more… On reflection, maybe we should have called this sale Hidden Treasures, as it certainly calls for some homework time to uncover all its delights.

The Monumental Collection from the Cellars of a Connoisseur is a three-part sale. Part I takes place in New York on 25 March, followed by Part II in London on 29 March and Part III in Hong Kong on 1 April. 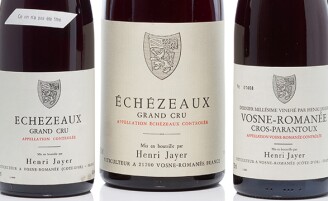 Past Auction
A Monumental Collection, From the Cellars of a Connoisseur Part II
29 March 2017 | 10:30 AM BST | London