A History Lesson on Rose Gold

S pring has finally sprung and to celebrate the warmer temperatures ahead, Sotheby’s Diamonds takes a close look at summer accessories’ chicest hue – rose gold. A perfect complement to a summer glow, the pink tint of the gold and copper alloy brings out the subtle blush tones of one’s skin. Despite its popularity in today’s jewellery, rose gold didn’t get its start until the 19th century in Imperial Russia. Carl Fabergé, renowned jeweller to the czars, was one of the first to put this precious metal to use in his most ornate creations, specifically his famous Fabergé Eggs. Blending yellow gold and copper created an alluring pink material that was first coined as “Russian Gold.” As this mix of alloys became popular among jewellers around the world, it was later renamed “Rose Gold.”

The colour of rose gold depends on the ratio of copper to gold, ranging from a soft pink to a deep red. As the copper content increases, the colour of the gold deepens to red. The components of true rose gold are approximately 75% gold and 22.5% copper and a small percentage of silver, which slightly lightens the effect of the dark copper.

The 1920s was a decade of excess: social, artistic and cultural dynamisms fueled opulent lifestyles. The stylish and fashionable women of the decade, intent on enjoying themselves and flouting conventional standards of behavior, dressed in luxuriously elegant jewels. Inspired by vivid colours, jewellers of the era introduced highly creative designs favouring the use of rose gold to add warmth and femininity to the jewel. Cartier, in particular, incorporated the pinkish material into many of their high jewellery designs at the time.

The Wall Street Crash of 1929 dramatically altered the world’s commercial landscape. The prosperity of the twenties quickly became a bygone era. This dramatic shift impacted the same dynamisms, influencing the designs of the new decade. Art Deco gave way to Art Nouveau, and jewellery saw a heavy influence of monochromatic and geometric aesthetics, heavily favouring the use of platinum for an icy white colour scheme.

However, as World War II unfolded, platinum was considered a strategic mineral vital to the war efforts, which caused many countries to restrict and even prohibit its use. Once again, gold in both yellow and rose hues was reintroduced into jewellery design and became the precious metal of choice. Today, this tradition continues. Rose gold’s understated elegance brings inimitable femininity and warmth to jewelled creations. 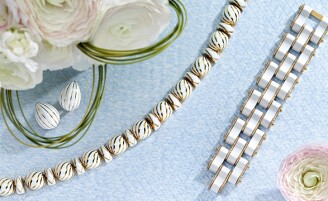