A Distinguished Wine Cellar to Benefit a Great Cause

G reat cellars are reflections of great collectors. A Distinguished Cellar Benefitting Instituto Solidare, to be featured at auction in New York on 21 October, reflects the passions, ambitions, success and generosity of one of São Paulo’s most prominent businessmen and philanthropists, with its focus on the greatest producers from each region, together with the top vintages. The wines in this collection were acquired in 1980s and 1990s in the United States, Europe and Brazil from the most reputable sources, mostly on release. Until they were removed for this sale, the wines – each meticulously catalogued in cellar records – had been untouched and in the cellar since they were acquired. As a result, the wines are in excellent condition. The impressive, purpose-built private cellar housing this collection comprised part of the ground floor of one São Paulo’s most compelling residences, and was designed to maintain perfect cellar conditions at 14 degrees Celsius (about 57 degrees Fahrenheit) and ideal humidity.

Full of what Sotheby's Serena Sutcliffe, MW referred to as "vinous jewels," this collection will make for an exciting, treasure-filled sale with Domaine de la Romanée Conti figuring prominently. "Every year, I taste the most recent release of DRC wines and, in-between, I am lucky enough to drink a variety of vintages at different stages of maturity," says Sutcliffe. "The majority now are from the decades of the 80s and the 90s and this is the outstanding strength of the Domaine’s wines in this sale." First Growth Bordeaux is another highlight. "There is a particular opportunity here to compare the twin vintages of 1989 and 1990 where, so often, one veers between 'preferring' one to the other, then changing one’s mind the next time around," says Sutcliffe. Bidders can also expect bottles from Italy. "Leaving France, we see the best of Tuscany in this collection, interspersed with notable wines from Iberia – they are all hand-picked examples," says Sutcliffe.

The proceeds from the sale of this collection will benefit the Brazilian charity foundation Instituto Solidare. Based in São Paulo, Solidare focuses its activity on providing access to education, culture and healthcare. The foundation’s most significant project to date, Solidare is currently constructing a 35,000-square-foot facility and enrolling as many as 8,000 students who will benefit from vocational training in partnership with SENAC, a private non-profit institution. Founded in 2008, Solidare is registered with the Brazilian Ministry of Justice as a Public Interest Civil Society Organization (PICSO) and certified by the São Paulo State Secretariat as a cultural entity.

All wines in this collection were inspected on-site by Paul Tortora, Senior Specialist, in São Paulo, Brazil. The wines were transported to the Sotheby’s Wine warehouse in temperature-controlled trucks, in both São Paulo and New York, and an overnight flight to New York. 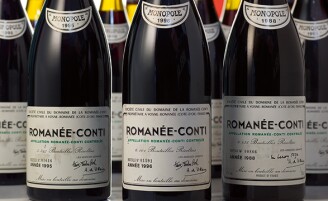