F or centuries, American folk artists have crafted striking pieces on a myriad of grounds. Some artworks serve a utilitarian purpose, while others were produced to attract the eye. Whatever the motive, the objects share astonishing backstories – of vice, ritual and celebrity. Below, discover the unlikely tales of five remarkable masterworks included in Sotheby's upcoming auction, Sculptural Fantasy: The Important American Folk Art Collection of Stephen and Petra Levin. 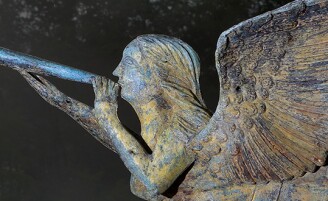 T he myth that fraternal lodge members had to ride a live goat during Satanic initiation rites was first broached in attacks on the Odd Fellows published in the 1840s. However, by the time this singular beast was made, the idea of goat riding had become an inside joke embraced by a number of American organizations, including the Odd Fellows, Freemasons and Modern Woodsmen of America, and fraternal supply companies offered a variety of unbalanced wheeled mechanical goats for use in boisterous lodge pranks.

The goat was a central figure in the initiation rite of an aspiring lodge member, and a ritual developed upon the moral principle of trust. Blindfolded and flanked by two 'brothers', the initiate would be led to a room of the lodge where the unpredictable 'goat' stood waiting. The initiate would have to mount the goat and take a ride, but could only hold onto the reins and grasp its body with his legs. As one could imagine, this ride was difficult and frightening: as the goat was pulled, each wheel on the platform, being a different size, would cause much wobbling and a potential fall. But unbeknownst to him, the risk was part of the fun – for if he did fall, the brothers would catch him. Many of these initiates would pull off their blindfold in fear and, doing so, would fail the test; once failed, the opportunity to join the lodge was gone forever. As all these rituals were very secret, no one could be forewarned. Of course, after the successful ride, a great amount of laughter and relief was the reward, along with the bond formed amongst the men and the journey into Lodge membership.

B y tradition, this large double-sided sign hung outside John Dyckman's shop for Boots and Shoes, located in Peekskill, New York and was likely inspired by circus elephants such as the famous "Jumbo." As New York became the center of the American circus business starting in the early 19th century, elephants became an increasingly popular motif.

This eye-catching trade sign was almost certainly inspired by the legendary circus elephant Jumbo, whom P. T. Barnum brought to New York in 1882. Jumbo, the first and largest African elephant shown in European zoos, was captured as an infant in 1862 and spent more than sixteen years at the London Zoo before Barnum purchased him. Barnum’s purchase – he paid $10,000, the equivalent of nearly $250,000 today – caused an international sensation, and British and American entrepreneurs featured Jumbo in a wide variety of humorous trade cards advertising everything from soap to thread. One such ad, which may have directly influenced this sign, depicts Jumbo running across the desert in leather boots.

I n 1926, a nine-year-old William Brinley and his father went to see the Christy Bros. Circus that rolled into their hometown of Wallingford, Connecticut. Mesmerized by the magic and excitement of the show, little Bill Brinley pronounced to his father that one day he would “have a circus of his own.” Using a variety of “found” materials, Brinley began making his circus models, transforming common wooden cheese boxes that were used at the time into circus wagons. In 1950, Brinley exhibited his work on The Ed Sullivan Show. Today, the Barnum Museum in Bridgeport, Connecticut holds a large miniature circus created by Brinley in its collection.

Carved and Painted Wood Relief of a Nude in Water, circa 1925

T he likely inspirational source for this relief is September Morn, circa 1912, by Paul Émile Chabas (1869-1937), which can be found in the collection of the Metropolitan Museum of Art. September Morn became a succès de scandale in the United States in May 1913, when Anthony Comstock, head of the New York Society for the Suppression of Vice, protested the painting as he deemed it to be immoral. His renouncement of the piece ignited its celebrity, and reproductions of the painting were sold ubiquitously, much like Carved and Painted Wood Relief of a Nude in Water.

H enry (Henri) Bernhardt was an eccentric artist who gained national notoriety on August 7,1939, when Life magazine published photos of the life-sized statues of nude women he had placed on his front lawn, each enclosed in a glass box. In a letter to the magazine's editor, a Spartanburg resident reported that "there's been much discussion about them. Every time the neighbors complain about them, he adds another figure." In late October 1939, the Spartansburg Herald-Journal announced that Bernhardt planned to open a museum “that would house numbers of [his] wood carvings and paintings, recognized by authorities as some of the best throughout the South.” Among the sculptures described in the article are a head of Christ and figures of King Herod, Salome in a dancing pose, and a slave bearing the severed head of John the Baptist. This earlier relief carving of Eve seducing Adam may have been among the works intended for the museum and is a prime example of Bernhardt’s provocative style. 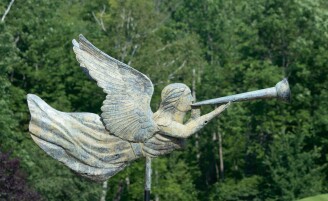