1. Edward Hopper grew up in a small town with a view of the Hudson. From the bedroom window of his childhood home in Nyack, New York, Hopper had a clear view of the Hudson River and the many boats and racing yachts that sailed out of the port. At age 15, Hopper built himself a catboat with wood provided by his father who owned a dry goods store in town. As a boy, Hopper had considered a career as a naval architect given his love for sailing. 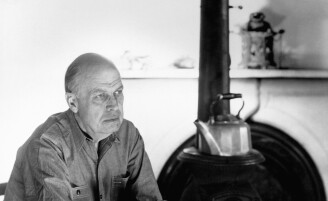 2. He was initially trained as a commercial illustrator. He began his artistic career taking lessons in illustration before transferring to the New York School of Art in 1900, where he studied under the eminent American artists William Merritt Chase and Robert Henri.

3. Hopper was an extremely tall man, standing at 6 feet 5 inches. By age 12, he had already reached 6 feet, a fact that certainly contributed to his growing sense of isolation and loneliness. His height and skinny physique, which had earned him the nickname “Grasshopper” from derisive classmates, reinforced his individualistic mindset.

4. He fell in love with Paris during his formative years. In October 1906, Hopper left for Paris where he lived with a French family at 48 Rue de Lille. Though he did not enroll at any school, he painted frequently outdoors and fell in love with the city and its culture: “I do not believe there is another city on earth so beautiful as Paris nor another people with such an appreciation of the beautiful as the French.”1

5. Hopper considered himself an Impressionist through much of his life. Though often grouped with the American Realists and “American Scene” painters, he remarked in 1962: “I think I’m still an impressionist.”2 He was first introduced to the Impressionists in Paris by a friend from art school, Patrick Henry Bruce. Here, Hopper was specifically attracted to the works of Pierre-Auguste Renoir, Alfred Sisley and Camille Pissarro.

6. He gained his first financial success from etching. In 1915, Hopper learned the process of etching from his friend and fellow artist Martin Lewis. He would soon master the medium and gained much of his initial critical recognition from his prints.

7. He was a celebrated poster artist during the First World War. In 1918, Hopper won a poster competition held by the United States Shipping Board. The poster struck a chord with the wartime nation and earned the artist widespread notoriety amongst critics and the public.

8. Hopper did not have his first one-man show until the age of 37. In January 1920, he had an exhibition of paintings at the Whitney Studio Club, founded by Gertrude Vanderbilt Whitney, at 147 West 4th Street. It was his friend, the artist Guy Pène du Bois, who had arranged for Hopper’s first solo exhibition.

9. His mature style came to fruition in the 1920s. From lessons learned during his years at the New York School of Art, Hopper’s early work was completed mostly en plein air or from live models. When he began to experiment with etching at the behest of Martin Lewis, he was forced to create images more often from memory. For the rest of his career, Hopper worked in a style that combined sketches from life with imagined compositions carefully constructed in the studio.

10. His artistic style remained relatively unchanged throughout his career. Unlike many of his peers who experimented with different artistic movements, Hopper’s visual vocabulary remained remarkably consistent from the mid-1920s until his death in 1967. His work cannot easily be divided into different stages of his life, as with many other artists.

11. Hopper’s most common subject was the solitary figure. A projection of his personal introspection, the artist frequently returned to images of lone figures, most often women, within a windowed interior setting. Often misinterpreted as a symbol for his own feelings of loneliness, these figures more likely represent Hopper’s preference for quiet and thoughtful self-examination.

12. His wife, Josephine Nivison, was his favorite model and was largely responsible for his initial success. By the time the couple married in 1924, Jo was a successful artist and actress in her own right. In 1923, she was invited to show six of her watercolors in a group exhibition of American and European artists at the Brooklyn Museum. She suggested that the curators also consider Hopper’s work. At her recommendation, the curators agreed to show six of Hopper’s watercolors. After the exhibition, the Brooklyn Museum became the first institution to purchase one of his watercolors – significantly, this was only Hopper’s second sale of his work. Jo was Hopper’s favorite model and posed for him for the remainder of his career.

13. Hopper had a strong interest in the work of Edgar Degas. In 1924, Jo presented him with an elaborate book on the French artist. His works from the 1920s and onwards showcase a clear understanding of Degas’s compositional devices, characterized most markedly by severe cropping, extreme diagonals, and uncommon visual perspectives.

14. He was fascinated by American vernacular architecture. Hopper’s interest in American architecture began during his childhood and persisted throughout his career. In choosing which buildings to paint, he often focused on their abstract forms rather than on their obvious visual beauty. He repeatedly evaluated the merits of cities he visited based on their architectural qualities.

16. He carried a quote from Goethe in his wallet. This quote, which he referenced habitually, served as the fundamental basis for his own artistic goals: “The beginning and end of all literary activity is the reproduction of the world that surrounds me by means of the world that is in me, all things being grasped, related, recreated, molded and reconstructed in a personal form and an original manner.”

17. Hopper lived modestly in a 4th floor walk-up. Despite his later financial success, Hopper chose to live unassumingly in a top-floor apartment at 3 Washington Square North in Manhattan. He lived and worked there from 1913 until his death in 1967. Even in his old age, Hopper carried buckets of coal up the four flights of stairs for the stove that heated his studio.

18. He loved inexpensive diners and lunch counters. Always conscious of the changing tides of success, the Hoppers were frugal in their spending. They shopped for most of their clothes at Sears and Woolworths, which they often wore until threadbare, and cooked their meals from cans. More frequently, they chose to eat out at inexpensive diners and lunch counters across the city. The couple’s only splurges were on books and tickets for the theater and the cinema.

19. Hopper was infatuated with film and often went on week-long movie binges. He once remarked, “When I don’t feel in the mood for painting, I go to the movies for a week or more.”3

20. Alfred Hitchcock modeled the famous house in Pyscho (1960) off of Hopper’s House by the Railroad (1925, Museum of Modern Art, New York). His art, which often alluded to the cinema and film noir, has been a significant inspiration for generations of filmmakers including Hitchcock, Wim Wenders, David Lynch and Terrence Malick.

21. Hopper is often referenced as a significant inspiration for contemporary photographers. The artist’s quiet contemplation of quotidian subjects and his penetrating study of the psyche are clearly referenced, both consciously and unconsciously, in the photographs of Gregory Crewdson, Robert Adams, Diane Arbus, William Eggleston, Robert Frank, Walker Evans, Stephen Shore, Nan Goldin, and many others.