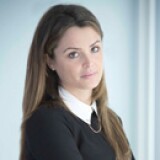 Yessica Marks joined Sotheby's London Prints Department in 2010. As a Deputy Director and Senior Specialist, she is responsible for sourcing consignments for the department’s biannual Print & Multiples and annual Important Ceramics by Pablo Picasso sales. Yessica is in charge of the prints included in the biannual Made in Britain auctions, in which new world record prices were achieved for several British artists, including Bridget Riley in 2014, and Richard Hamilton in 2015.

Yessica has been instrumental in high profile sales across each category of printmaking, including the sales of Edvard Munch’s The Scream and The Girls on the Bridge, each achieving world record auction prices of £1.8 million in 2016 and £986,500 in 2013 respectively. Yessica has also been involved in the sales of notable single owner collections belonging to Lord & Lady Attenborough (November 2016), Gunter Sachs (May 2012), and Stanley J. Seeger (March 2011, September 2013), as well as the Private Collection of Important Ceramic by Pablo Picasso (March 2013).

Prior to joining Sotheby’s, Yessica studied in New York and London, obtaining a BA Hons degree from Central Saint Martin’s in Post Modern Art Theory and Curation. She speaks fluent Swedish, Norwegian, and Danish, and travels regularly, with a particular focus on Sweden, Spain, Switzerland, and Italy.