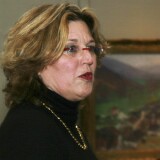 She has been involved in Judaica sales at Sotheby’s since 1985 and is responsible for establishing sales in Israel and promoting Judaica sales worldwide.

Born in Tel Aviv, Ms Saker has a Bachelor of Arts degree from the University of Haifa in Economics and History of Art. She also earned a Master of Arts degree in Urban Planning from Technion in Haifa.