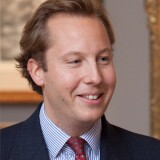 Mark Griffith-Jones graduated from the University of St. Andrews, Scotland with a degree in Art History and joined Sotheby’s in 2004.

Since then he has participated in numerous landmark sales including: the 2006 William Blake Sale ($10.9 million), the 2007 Important Turner Watercolours from the Collection of Guy and Myriam Ullens Sale (£10.7 million), the 2010 Exceptional Eye Sale (£6.8 million) and the 2014 From Goya to Picasso: Works from the Private Collection of Jan Krugier Sale (£74.8 million).

Throughout his time at Sotheby’s he has been privileged to handle some of the greatest works from his field and he has helped to establish world-record prices for many artists including: Samuel Cooper, John Smart, John Robert Cozens, Thomas Gainsborough, Henry Fuseli, Daniel Gardner, Richard Parkes Bonington, and most recently Sir Peter Lely.