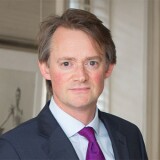 Mr Gibbs’ career exemplifies his passion for Islamic Art, which began in 1988 with a visit to al-Andalus and the Great Mosque of Cordova. Prior to joining Sotheby's, he served for seven years as lecturer in Islamic Art at the School of Oriental and African Studies (SOAS) at the University of London, where he set up the innovative Foundation Course in Asian Art with Sotheby’s Institute of Art. In 1997, he was invited by the British Council to co-curate the exhibition Traditions of Respect: Britain and Islamic Cultures to mark the 50th anniversary of the independence of India and Pakistan. The exhibition was opened by Her Majesty Queen Elizabeth II in Lahore and New Delhi.

Mr Gibbs worked for two years with The Abu Dhabi Islands Archaeological Survey (ADIAS) on Marawah Island off shore Abu Dhabi under the patronage of HH Sheikh Mohammed bin Zayed al Nahyan. He went on to excavate the Mamluk Period fortress at Homs, Syria, as part of the British-Syrian Archaeological Project at Homs Citadel. Earlier in his career, he spent several years travelling across the Middle East carrying out research and excavations in Egypt, Syria and the Arabian Gulf.

Mr Gibbs has lectured at the University of London, the British Museum, the Victoria & Albert Museum, the Honolulu Academy of Arts and the Museum of Islamic Art, Doha. In 1997, as visiting scholar at the British Museum, he catalogued The Godman Collection of Iznik Ceramics and in 2000, he was visiting scholar at the Art Institute of Chicago and the Gayer-Anderson Museum in Cairo.