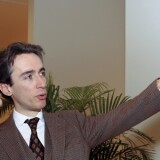 Florent Heintz joined Sotheby’s Antiquities department in 2001. Prior to coming to Sotheby's, Dr Heintz worked as Keeper of the collection of ancient coins at the Fogg Art Museum and as Curatorial Assistant at the Worcester Art Museum, Worcester, Massachusetts.

His publications include a monograph, Simon le Magicien, Paris, 1997, several articles in academic journals such as Zeitschrift für Papyrologie und Epigraphik, the Journal of Roman Archaeology and the American Journal of Numismatics, and contributions to exhibition catalogues such as his object entries and essay on Roman magic in Antioch: The Lost Ancient City (Princeton University Press, 2000).