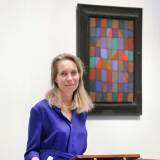 Aurélie Vandevoorde joined Sotheby’s Paris Impressionist and Modern Art department in 2011 as a specialist and was appointed Head of the department in December 2013. She has actively contributed to the development of Impressionist & Modern Art sales in Paris, where world records have been set, notably for Pablo Picasso, Amedeo Modigliani and several Surrealist artists. She notably played an important role in the sale of Amedeo Modigliani's Portrait of Paul Alexandre, which sold in Paris for €13.5 million in June 2014.

Prior to joining Sotheby’s, Aurélie Vandevoorde started her career as a tax lawyer before becoming an auctioneer and working in Old Master Paintings. She is a graduate of the Institut d’Etudes Politiques de Paris (Sciences Po) and H.E.C. and has a Master’s degree in both Tax Law and Art History.