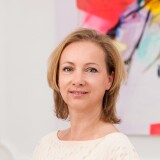 Andrea Jungmann has been with Sotheby’s since 1989. In 2001 she was appointed Managing Director for Sotheby’s Austria and Hungary and 2004 was also named Senior Director Sotheby’s London. She has years of experience in the field of 20th century art and the auction world.

She works closely with the London and New York departments for Impressionist Art and Modern & Contemporary Art, and has been involved in Sotheby's London's Vienna 1900 sales in 1992 and 1994, and the Gustav Klimt and Emilie Flöge sale in October 1999.

In addition to the sale of The Massacre of the Innocents by Paul Rubens in 2002, she was instrumental in the sales of various important works by Egon Schiele and Gustav Klimt, such as the Krumauer Landschaft by Egon Schiele, which sold for £14.6 million in London in June 2003, and Gustav Klimt’s Kirche in Cassone at Sotheby’s London in February 2010, where it achieved £26.9 million - a new world auction record for a Klimt landscape.

She led the sale of Schiele’s Häuser mit bunter Wäsche (Vorstadt II) on behalf of the Leopold Museum in Vienna. This sale set a new record for Schiele at auction, almost doubling the previous record for one of his landscapes when it sold for £24.7 million.

Most recently she directed the sale of another masterpiece by Gustav Klimt, Litzlberg am Attersee which achieved $40.4 million in November 2011 at Sotheby’s New York and is the second most expensive landscape by this artist.

Ms Jungmann has a Master's degree in History of Art as well as a diploma in cultural management.