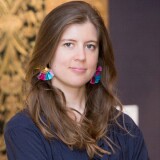 Since joining Sotheby’s in 2011, Alexandra Yasmina Roy has been responsible for researching and cataloguing the works of art in the chronologically and geographically diverse Arts of the Islamic World sales held biannually in April and October as well as being involved in important single-owner collections, notably the Harvey Plotnick Collection of Islamic Ceramics, An Eye for Opulence: Art of the Ottoman Empire and the Sven Gahlin Collection.

Of French and Egyptian descent, Ms Roy grew up in Oman and Yemen and has travelled extensively in North Africa and the Middle East. Prior to joining Sotheby’s, she studied Art History in both the United States and London, earning a BA Hons degree in the subject from Wellesley College, Massachusetts, and an MA in Byzantine Art and its interaction with Islamic Empires from the Courtauld Institute of Art.