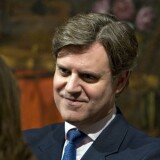 Alexander Bell, Joint International Department Head, Co-Chairman Worldwide of Sotheby’s Old Master Paintings department, joined Sotheby’s in 1986 from Christ’s College, Cambridge, where he gained a Masters Degree in History of Art. He was appointed Head of the Department in London in 1994 and subsequently oversaw the record-breaking series of sales of Old Masters from the collection of the British Rail Pension Fund in 1995, 1996 and 1997, as well as the sale of the Bentinck Thyssen family in 1995 and the collection of works formed by E.W. Fattorini in 1996, 1997, 2003 and 2004.

Appointed co-Head of the Worldwide department in 2005, Mr Bell has continued to oversee landmark sales including the collections of Dr Gustav Rau (2008), Mrs Barbara Piasecka Johnson (2009), the Dukes of Northumberland (2014) and Castle Howard (2015).

He has also been involved in many of the most significant private sales of Old Master paintings during his tenure, including: Pieter Brueghel The Elder’s Wine of St Martin’s Day to the Prado, Madrid in 2011 (a painting thought to have been lost until rediscovered by Mr Bell and his colleague, James Macdonald, in Spain in 2006); Parmigianino’s Virgin with Child, St John the Baptist and Mary Magdalene to the Getty Museum in 2017; and Raphael’s Madonna of the Pinks, sold to the National Gallery in London in 2004 for £35 million; then the highest ever price for an Old Master achieved in a private sale negotiated by an auction house.

Since 1994 when he took over leadership of the department, Sotheby’s has become firmly established as the dominant market leader in Old Master Paintings. And has sold a higher value of Old Masters at auction worldwide than any other auction house for 15 of the last 20 years.