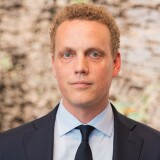 Alex Branczik joined Sotheby’s Contemporary Art department in 2004, becoming Head of Contemporary Art, Europe in 2016. Mr Branczik was  closely involved in the sales of major collections, including the Collection of Jean-Yves Mock and, most recently, the groundbreaking Bear Witness single-owner sale in March 2015. He drove the transformation of our October Contemporary Art sales from mid-season events into high-profile auctions, which have included the October 2012 sale of Gerhard Richter’s Abstraktes Bild from the collection of Eric Clapton for £21.3 million – at the time the record for any work by a living artist.

Mr Branczik oversaw the sale of Zeng Fanzhi’s The Last Supper in 2013 for HK$180.4 million, a new auction record for any work by a Chinese Contemporary artist.

Prior to joining Sotheby’s Mr Branczik trained as an Equities Analyst at UBS Investment Bank.

He speaks fluent Italian and French received a First Class Honours degree in Modern Languages and Literature from Pembroke College, Oxford University, and a Master’s degree with Distinction in Art History from the Courtauld Institute of Art, London.